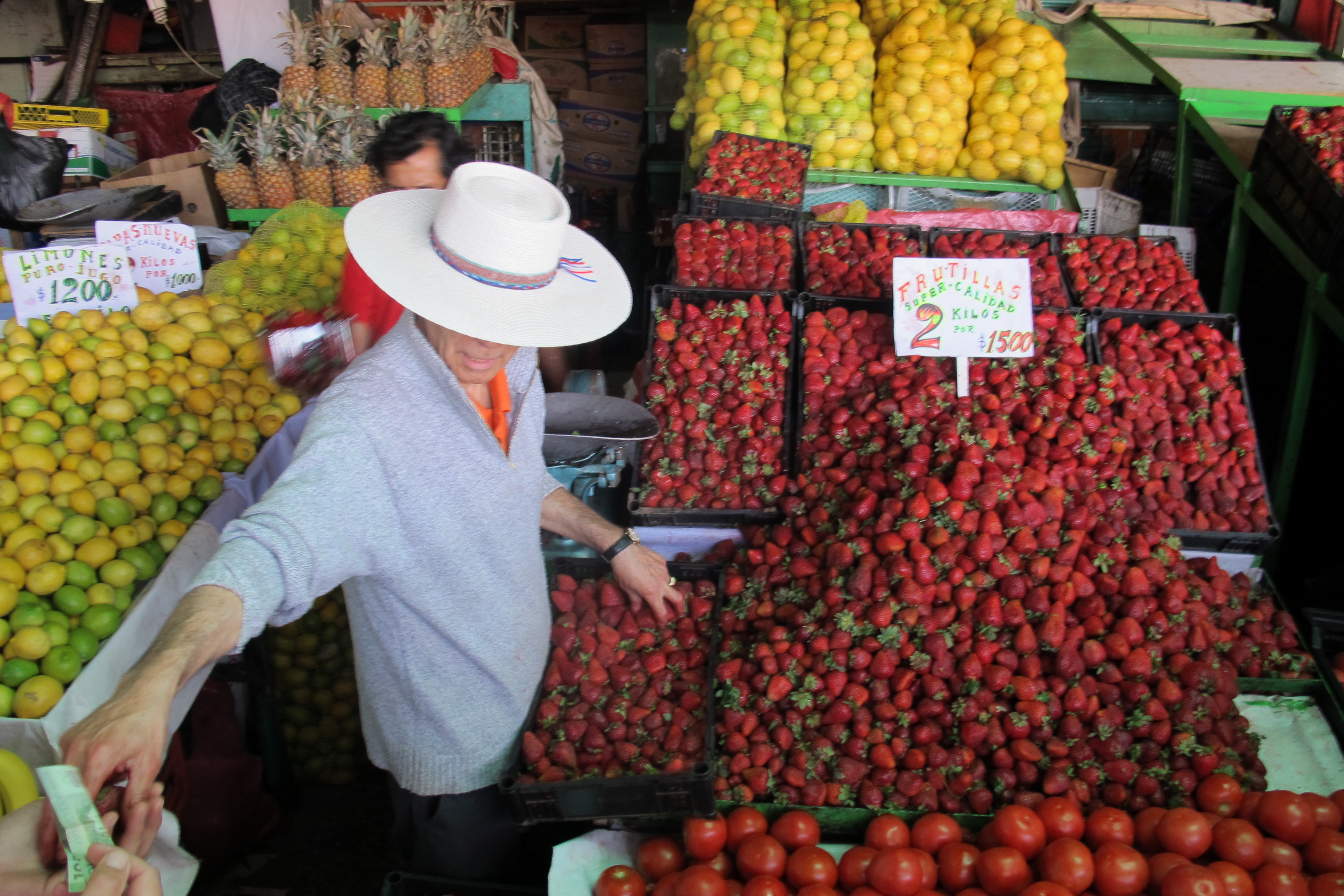 When we are in a new place and want to get a feel for the food scene we always head to the same place and Santiago is no different. Where do you go to find the freshest food in town? The Central Markets, por supuesto! And, Santiago’s markets definitely deliver. As many visitors to Santiago will notice, the city is quite orderly, clean and has rather more of a Euro than a Latino feel, mostly because many of the historic buildings have been lost over the years due to earthquakes. Chile has a long history of quakes, the most recent being a Magnitude 8.8 that hit the country south of Santiago in 2010. So, much of the city core is filled with new buildings and is very orderly and quiet.  Not so in the bustle of the markets. This felt like the real Santiago.

Mercado Central, the first stop on our guided tour, is one of the oldest buildings in Santiago. Designed by British Architect Charles Henry Driver, it is a beautiful building of cast iron and glass. Driver was known for designing railway stations and other iconic buildings in cities across England and South America. And while the architecture is beautiful, I am more interested in the rows and rows of fresh seafood. Everything from scallops and clams- called machos here- to sea urchins, trucha and, much to our chagrin, farmed Chilean Salmon- Chile is one of the largest exporters of farmed Atlantic Salmon. Something not known by many salmon lovers is that much of the Atlantic Salmon found on menus in North America is, in fact, farmed in Chile and never swam in the waters of the Atlantic. But, that’s a rant for another day! Clams, or as they say in Santiago…machos…nuzzled up to more types of fish I could count.

Meanwhile, back at Mercado Central, you can’t visit the fish stalls in Santiago without running into some congrio – conger eel – an apparent favourite of Chile’s Nobel Prize-winning poet, Pablo Neruda, who wrote an ode to the congrio entitled “Oda al Caldillo de Congrio.”   If you care to try a bowl, stop by one of the many seafood restaurants at the market. We chose Tio Willy’s and not feeling in the mood for an eel stew, I opted for a bowl of the seafood stew. I wouldn’t say it was the best seafood, I have eaten, but the setting made up for the slightly rubbery squid! 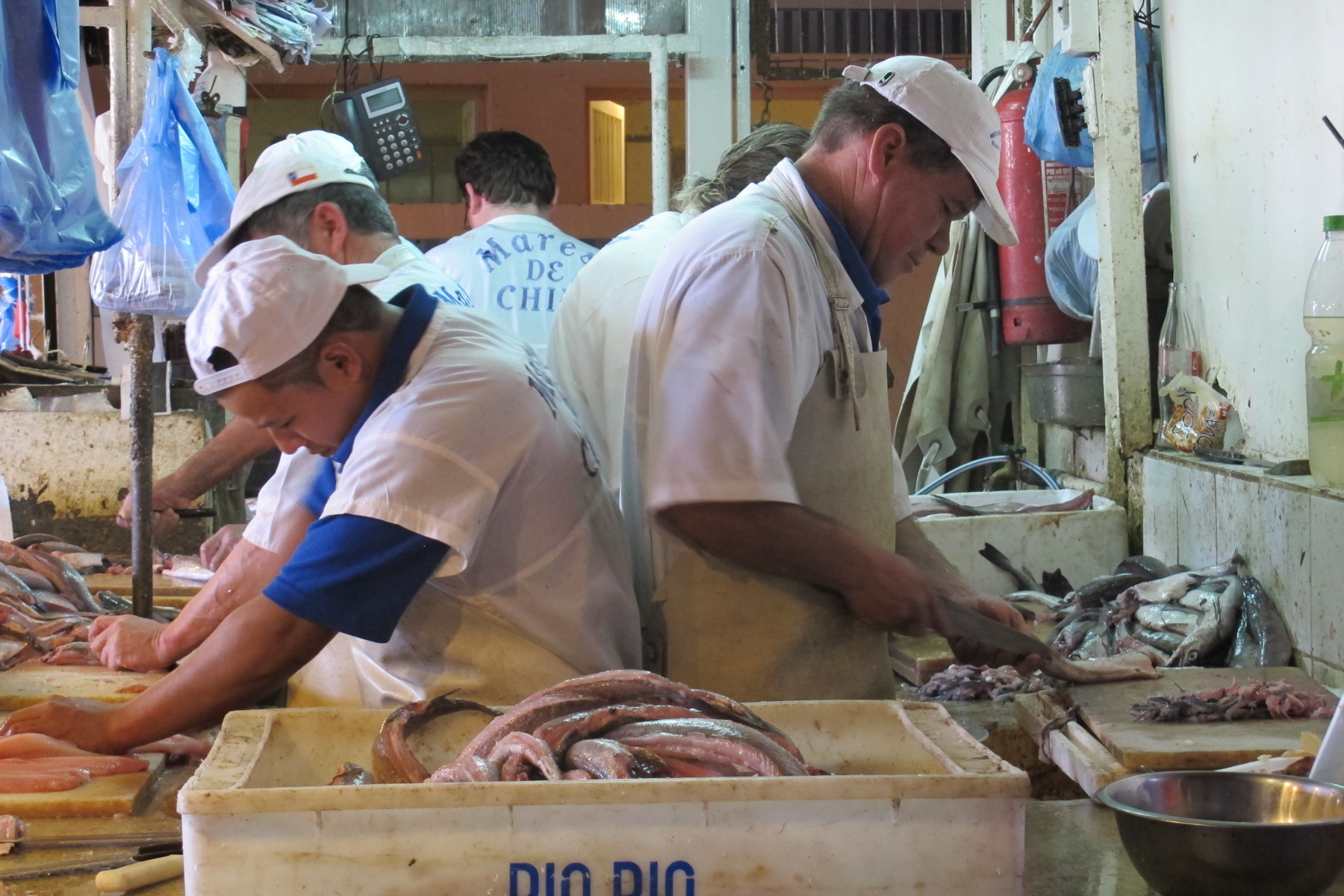 We visited the markets on New Year’s Eve and all of the fish mongers were in fine form.   Not quite the fish-throwing scene of Pike’s Place Market in Seattle, but close.  As Doug learned, be careful when you ask if they mind if you take a photo! 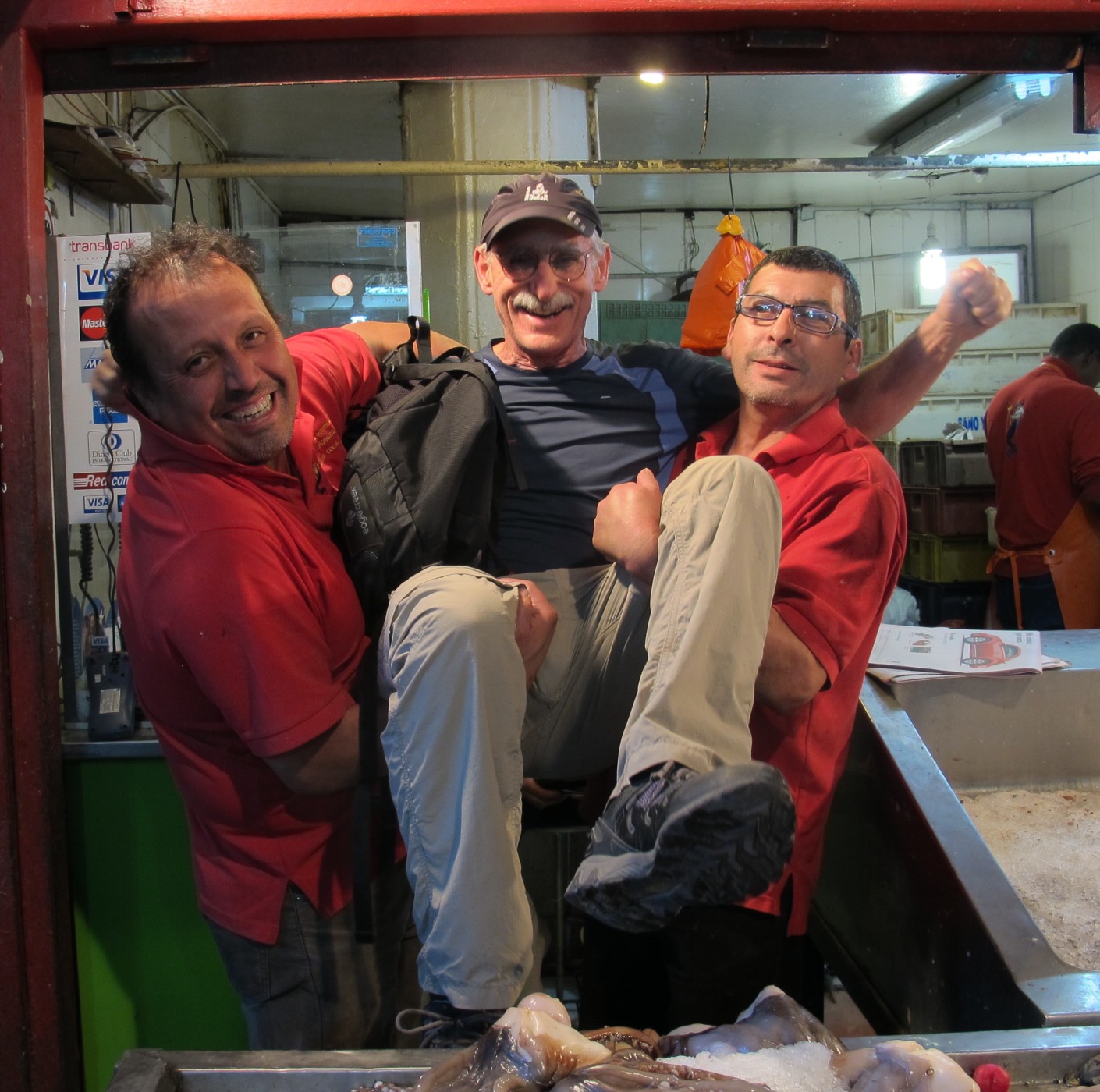 Dugla and the Crazy Fish Mongers at Mercado Central, Santiago

Our next stop was La Vega, an enormous market brimming with fresh fruits and vegetables, food stalls selling pastas and olive oils, cheeses and breads, and, lucky for us because we just happened to be having a craving…Santiago’s first Espresso Cart!   Café Altura is located in the back corner of La Vega and they make a mighty fine cappuccino, I must say. 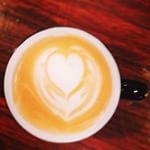 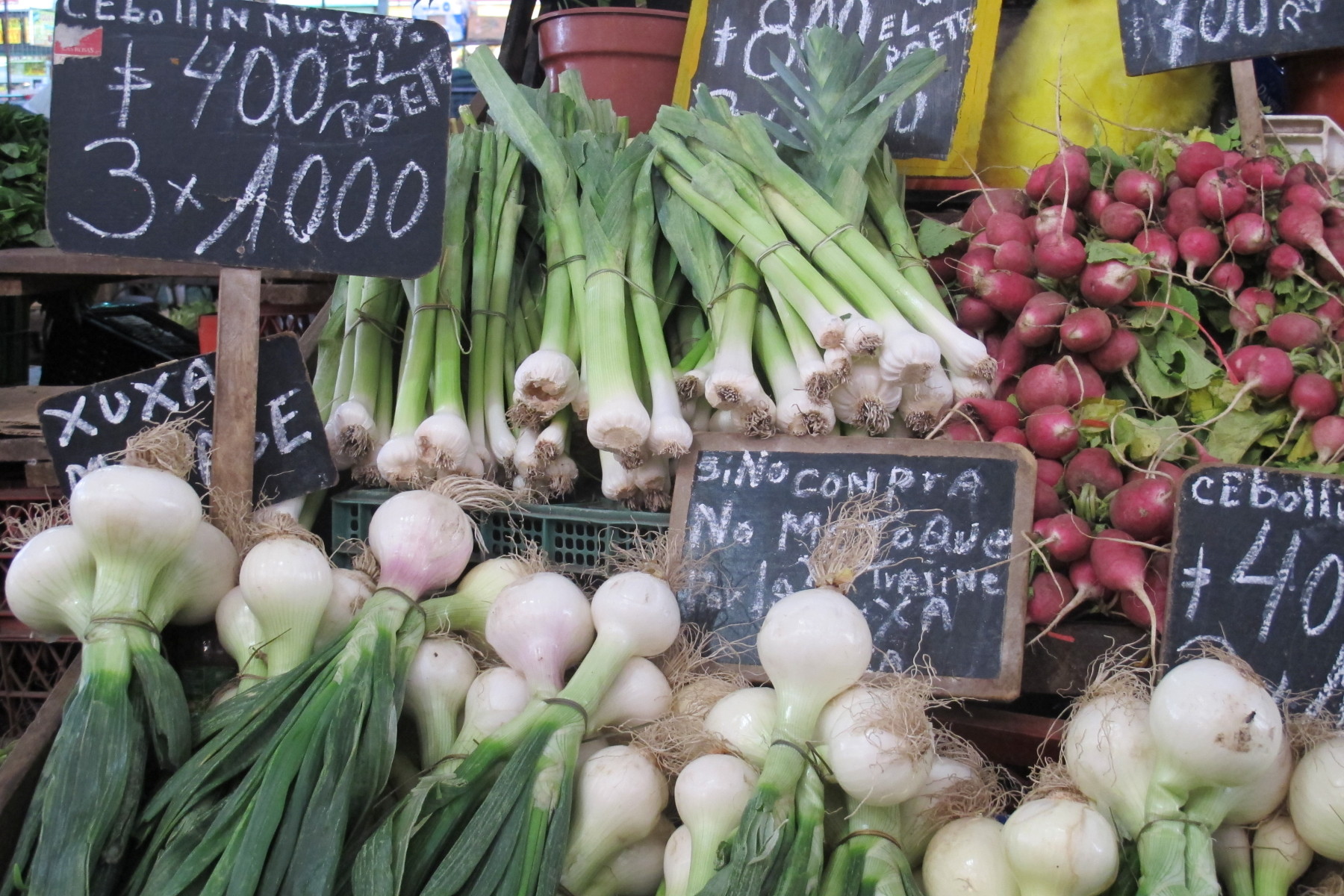 New Year’s Eve, like everywhere else around the planet, is a big deal in Santiago. Fireworks galore, people everywhere, firecrackers going off at all hours. Outside the markets, vendors were selling yellow underwear- good luck befalls the wearer as midnight strikes, or so they say- containers of spray-confetti, firecrackers, and basically anything you can think of that will make a racket! Not being ones for the giganto Año Nuevo scene, we decided not to go to the city centre and instead opted for dinner at a great little Tapas Bar directly across the street from our B & B. Run by a Belgian ex-pat, Ruca Bar  serves inventive small plates made with local ingredients prepared by an Irish chef. Octopus is a popular dish in Santiago and Ruca Bar served it with a twist. The Pulpo on the Rocks was a play on octopus cooked in the traditional way, on hot rocks. This time, the “rocks” were potato croquettes dyed with octopus ink. Perfectly grilled octopus and a nice glass of Chilean red?  Perfecto!  And, being suckers for a good burger, we had to order the Mini Pulled Pork and Osso Bucco Hamberguesas.   As we slid back across the street just before midnight, we were invited to join a small Año Nuevo celebration with the owners of our hotel, Monica and Claudio!  Chilean bubbly at midnight and loads of hugs and kisses from the nicest people?  Not a bad way to start 2015! 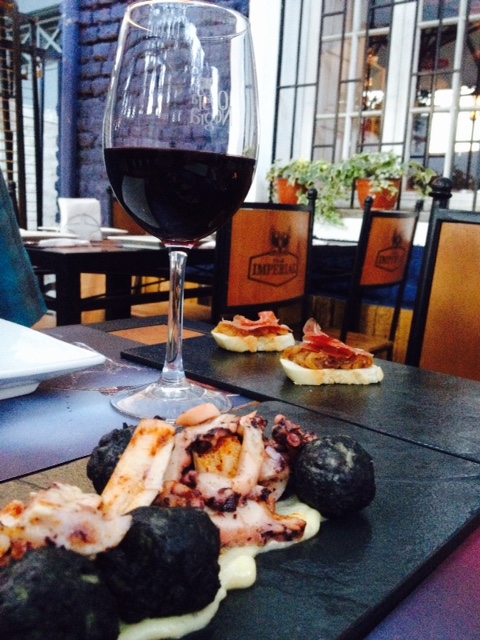 Pulpo on the Rocks 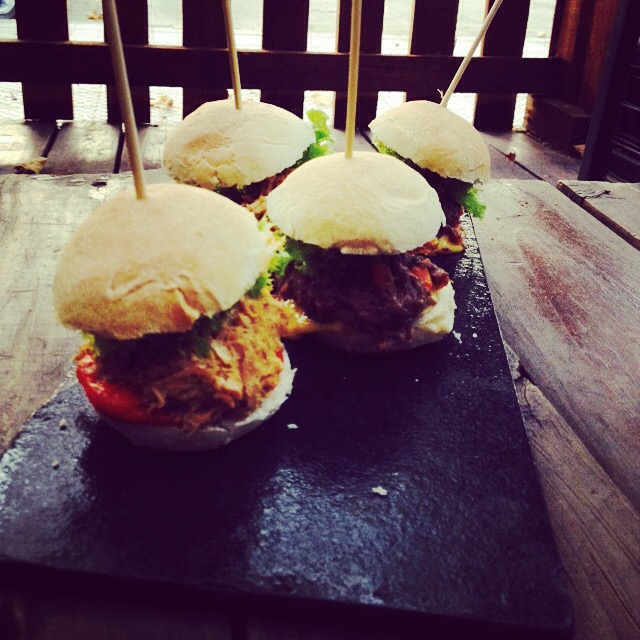 Our last night in Santiago was reserved for dinner at a new-ish gastro spot called d.o. Restoran. Known for its “cocina originaria” or, designation of origin cuisine, d.o. Restoran prepares local and regional Chilean ingredients in innovatively delicious ways. Without the Espacio Culinario sisters, Fran and Anita, we would never have found this great place. The chef, Juan Morales, was a runner-up in Top Chef Chile, spent ten years working in top kitchens in Spain and is the head of an NGO that works with street kids by providing them scholarships to culinary schools.

Luckily for us, Fran requested the eight-course tasting menu when she booked, and being one of only a few tables as it was just after New Year’s, we were given the royal treatment. And, annoying photo-taking access to the kitchen.  Always helps to have a couple of local foodies at your table! 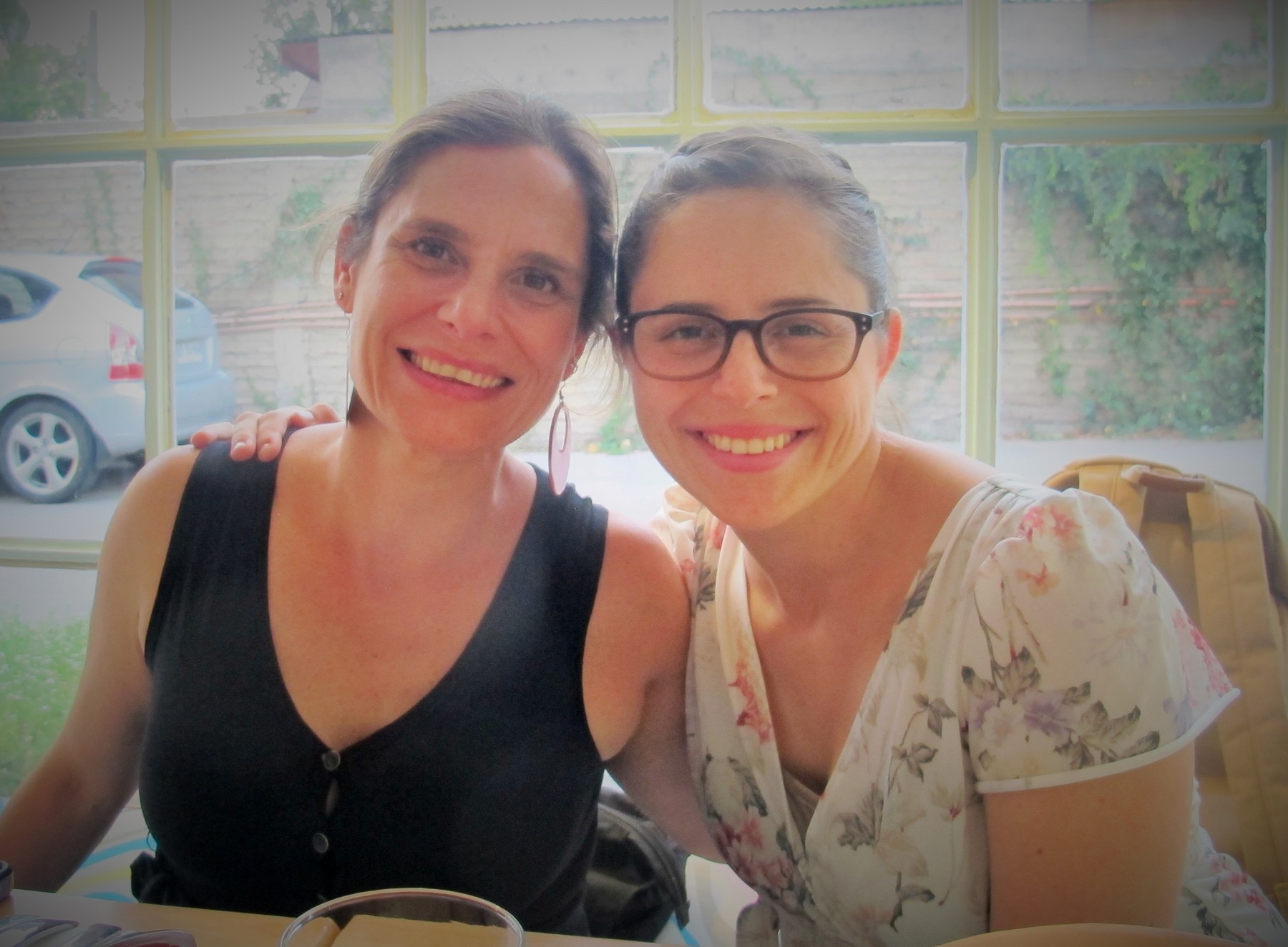 Our first course was simple, fresh-baked mini Bocados de Damas,  served piping hot in a brown bag with pickled onions, octopus ceviche and a chilled Chilean lager on the side! Each course was served on simple Chilean pottery and featured traditional recipes made with indigenous ingredients, re-constructed for a modern twist.   Loco, a shellfish similar to abalone was perfectly “cooked’ in a lime marinade and served with pickled vegetables. 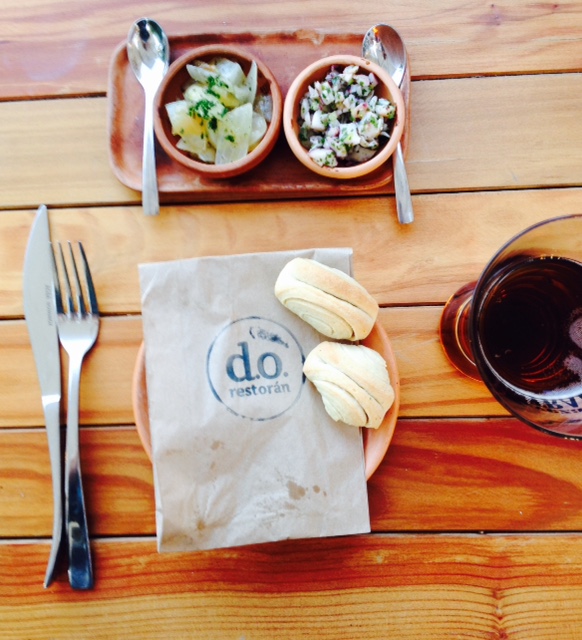 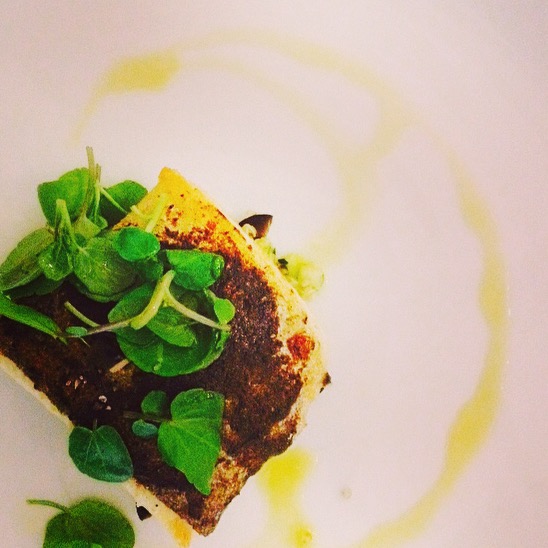 After our first course, we moved inside to get down to the serious eating. Roasted trout, coated with a black olive tapenade, sat on a cloud of quinoa and vegetable pilaf.  Loco, a shellfish similar to abalone was perfectly “cooked’ in a lime marinade and garnished with pickled vegetables. Slow-braised pig’s cheeks cozied up to pureed camote– sweet potato-  and cebolla frita- crispy fried onions.  Cow’s Tongue, to be honest, not something I would eat by choice, was made surprisingly delicious with a garnish of avocado mousse and vegetable ceviche.  Quinoa Salad, garnished with micro-greens… cannelloni stuffed with goat…I’m sure I’ve left a course or two out. 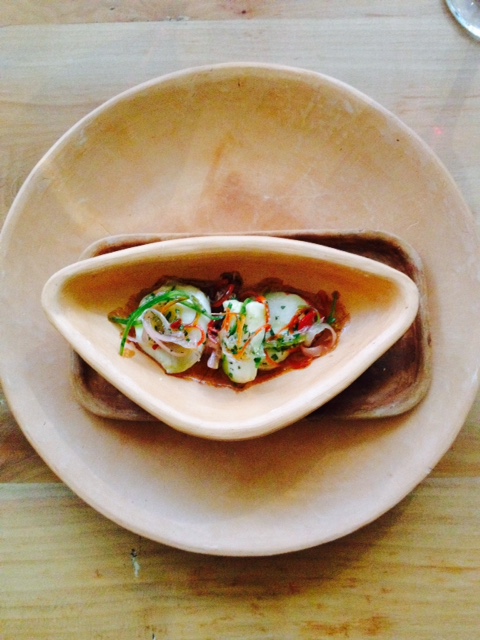 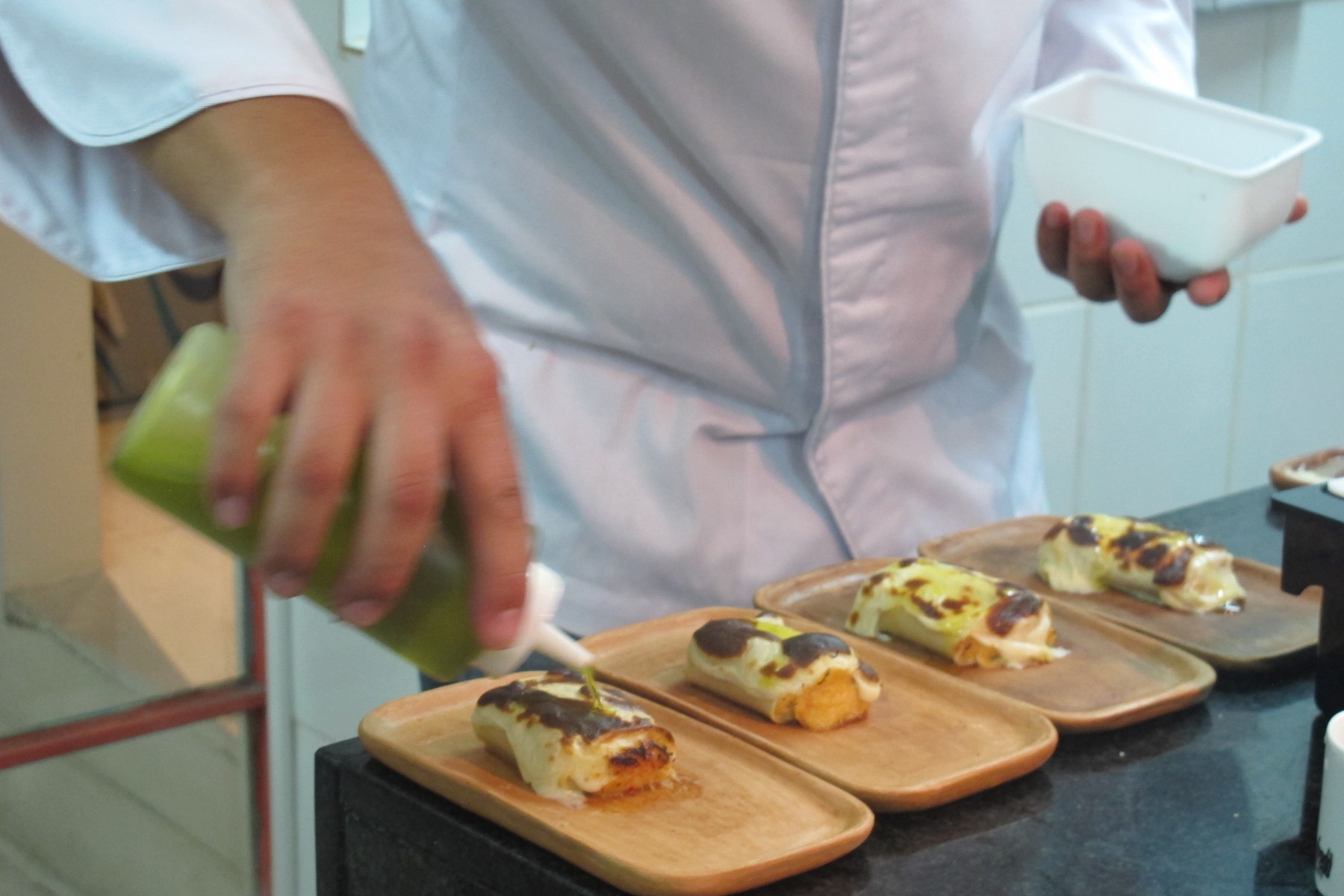 Drizzling the Cannelloni with Herb Oil

Each new dish seemed to out-due the last, and if I was a really diligent food writer, I would have taken extensive notes. But, we were having too much fun to get bogged down in the minutia. And, lucky for us, Anita is a trained sommelier and chose a delicious Chateau Los Boldos, Carménére that paired perfectly with everything.  Even the three, I kid you not, THREE…dessert courses!  Milk Ice Cream with sweet milk foam and candied papaya on a bed of white chocolate “sand,” a mini custard-filled beignet with mango helado and, just when we thought it had all, sadly, come to an end, the chef sent out a platter of quince jellies and mini bread puddings. 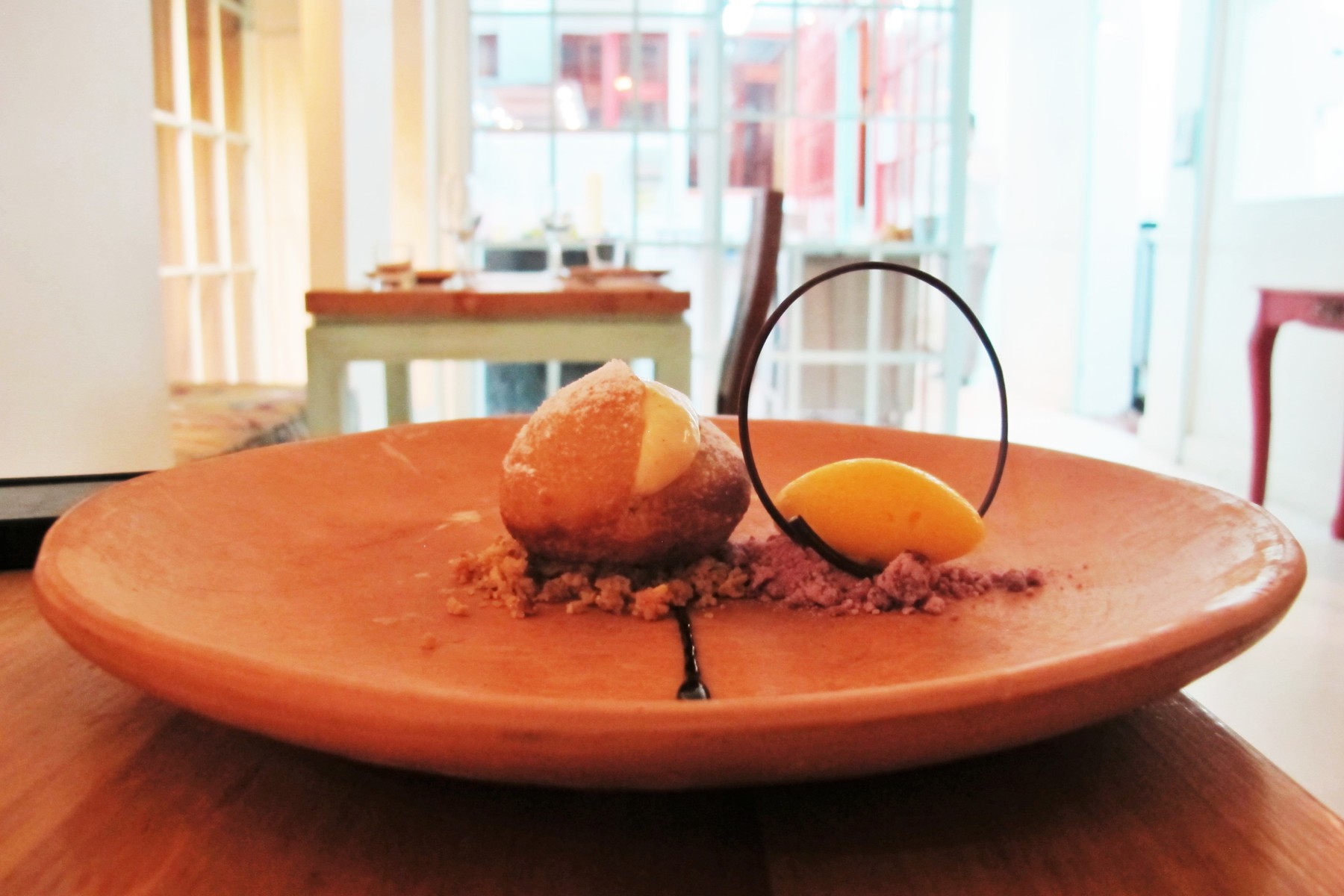 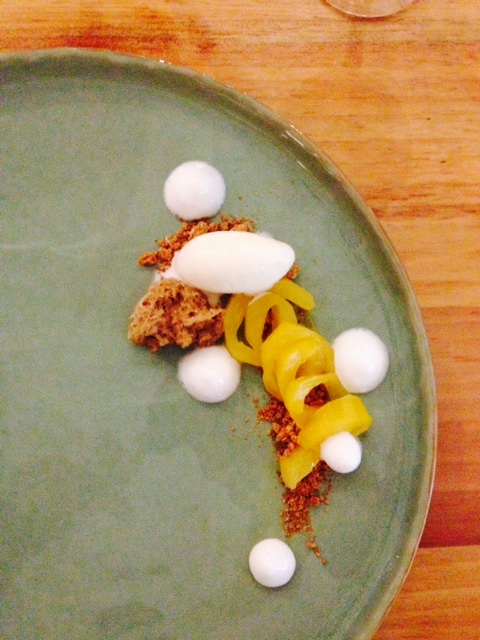 I’m not usually a fan of tasting menus. I find that the whole culinary experience is so contrived that you leave forgetting most of what you ate and feeling completely over-stuffed. Not so at d.o. Restoran. Surprisingly, we left feeling very content, in a bit of a wine glow, and lamenting the fact that the following day we would move on, leaving our new-found foodie friends behind. We vowed to return. There were way too many restaurants that still needed to be checked out and, let’s not forget, we never got a chance to try that famous Chilean hot dog, “ El Completo!” 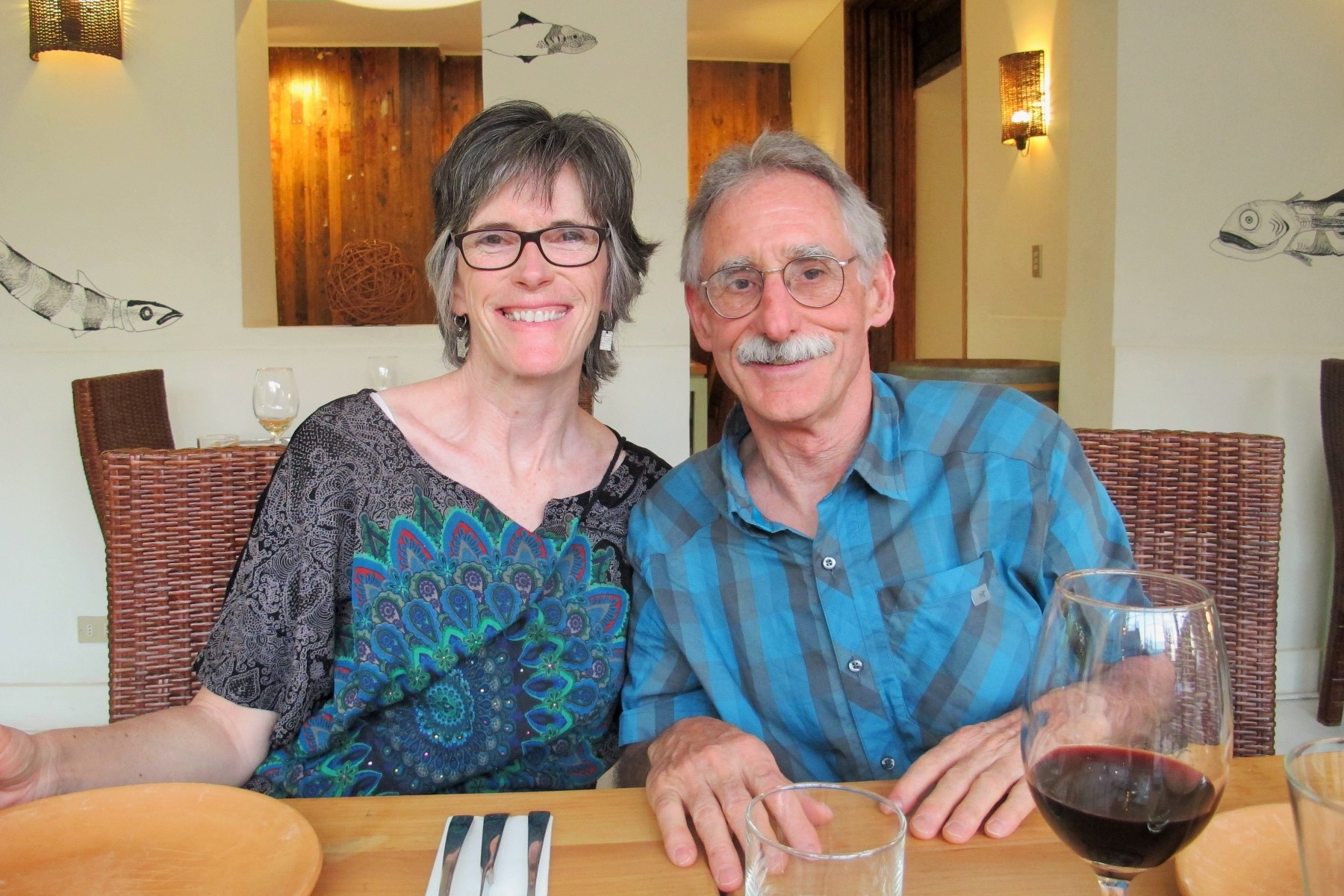 How I spent my Costa Rican VacationIf you hadn’t already figured this out about me, food and cooking have been the…December 1, 2015

Eating Chile- Part 2When we are in a new place and want to get a feel for the…February 2, 2015