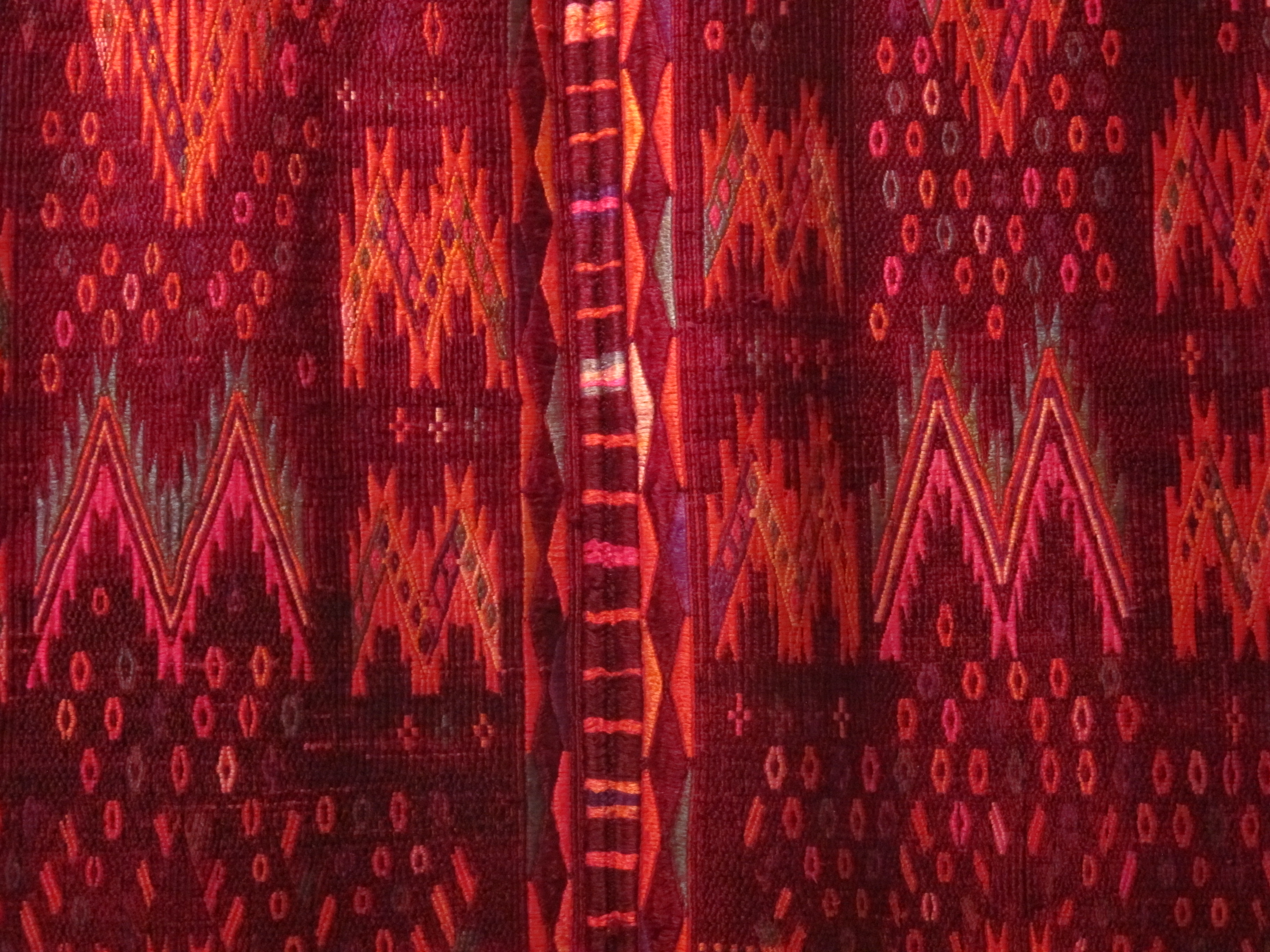 “Poco de sal y gusano y limón después de mezcal,” Flor instructs, as we all knock back shots of mezcal at 10:30 am.

We sprinkle an orange-coloured salt onto wedges of lime as we are told, and suck the limey-salty juice, while feeling the burn of the mezcal in our throats. Salud, we say to our fellow class-mates!  Salud!

It’s descanso, otherwise known as recess, at Oaxaca Spanish Magic, our language school http://www.oaxacaspanishmagic.com/ in the historic centre of Oaxaca.  Run by Flor Irene Bautista Carreño, otherwise known as Flor, for the past 17 years, Spanish Magic is one of a number of language schools in Oaxaca, but it didn’t take long for us to see that Spanish Magic was definitely the best school in town.  This day, crowded around the mezcal table was a mix of Dutch, Belgian, Swiss, American, Polish and Canadian students, some hoping to improve their already great Español (Dugla), and others, to at least learn enough to avoid looking really stupid when trying to ask directions to the nearest mercado (me)!

“Salt with ground worms and chiles,” Flor replies, in a tone that implies “how could you not know that?”

I am a little taken aback, I must say.  Does she think that Canadian chefs use worm salt in their favourite recipes? And, it’s not like I don’t know salt.  I buy it everywhere I go- Maldon Salt, Fleur de Sal, Salar de Uyuni- but salt with ground worms?  That is definitely a new one on me and, a little bit creepy, don’t you think? But, I am trying to keep an open mind here.  After all, we are in Oaxaca and mezcal and the culture surrounding it is the life blood of the Oaxacans, that is, after maize, but I’ll tell you more about that later.  And so with my open mind, I whisper to Doug, “mezcal at this time of day is one thing, but ground worms?”  And not only that, just as I am about to go for another sip, I spy something floating in the bottom of the bottle.  On closer inspection I see an adorable little reddish-brown, larvae-looking creature.  Of course, I knew the story about the worm in the mezcal.  Who hasn’t got a friend who went on a holiday to Mexico and returned with a tale or two about the mezcal worm?  So, what’s the point, I wonder.  A sign of quality mezcal, perhaps?  A strongly-held cultural tradition?  Afterall, Oaxacans are known for their predilection for grasshoppers, so worms in booze isn’t such a stretch.

“Qué es eso?” I ask Flor, at once fascinated and repulsed, never having been one for worms myself- the edible types, that is.

According to Flor, nobody knows how the worm gets into the agave plant, but the “gusano” has all kinds of magical and flavouring-enhancing properties.  “The leetle worm is in there.  How? No sé,” she tells us.

Turns out the worms live in the trunk of the maguey plant from which mezcal is made and it is said they help to give mezcal its distinctive taste. Some mezcal producers always put one of the little darlings in each bottle, but to mezcal purists it’s too gimmicky.  In fact, after a little research, I later learned that the whole worm in the mezcal thing was started by a savvy Mexican entrepreneur named Jacobo Lozano Paez in 1950, and it really serves no purpose at all, other than, according to one writer, “get gringos to drink the stuff.”

Whether gimmick or tradition, I am willing to give it a go.  And so as Flor pours us another round, the wormy salt actually starts to grow on me.  And, I must say, my español has really begun to improve!

Cual es tu problemo?” I say, not waiting to hear his response as I turn to join the young Europeans, while Doug goes back to his desk to review. 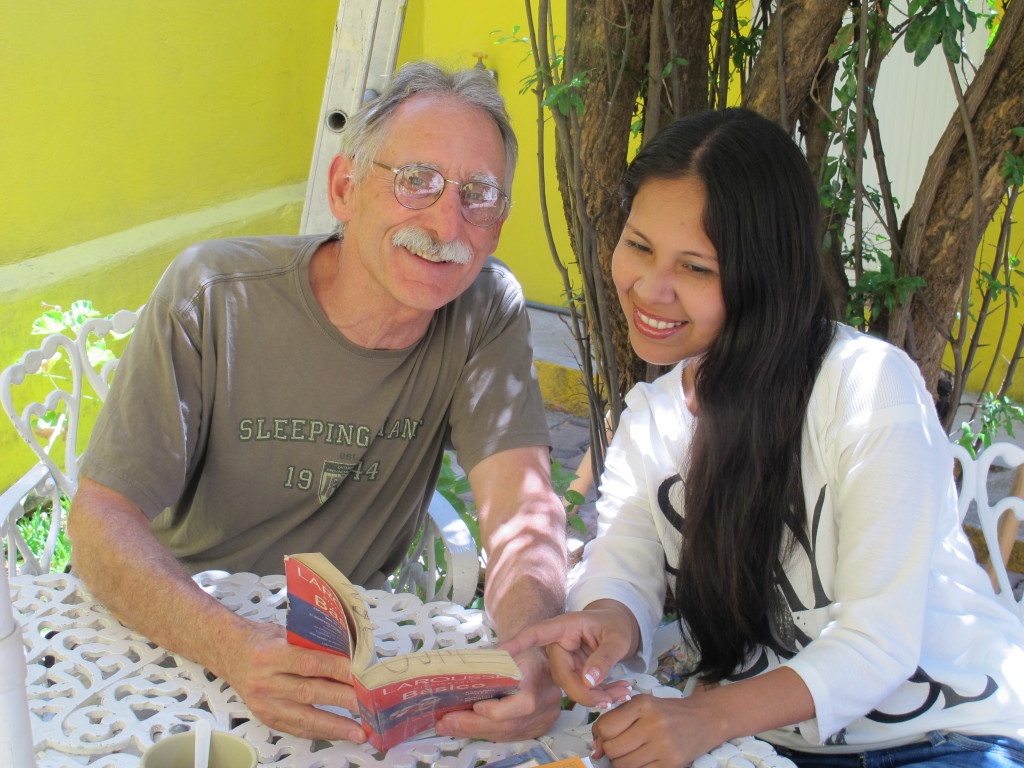 Dugla, ever the devoted student, with his teacher, Lili!

This pretty much sums up our approach to learning Spanish.  Doug, ever the devoted student, who reviews, reviews, reviews and is now working on the subjunctive verb-tense, and then there is me, more of a social learner, who isn’t convinced that conjugating verbs is all its cracked up to be and prefers to chat about Oaxaca with my excellent instructor, Enmanuel.  In Spanish, of course.  Or, at least, in “Spanglish!” Every morning we study Spanish for three hours, and, I’ll tell you, after our little morning mezcal party, I really started to look forward to descanso every day.  But, it wasn’t all mezcal and sal de gusano at Oaxaca Spanish Magic. Maestra Flor runs a tight ship and by the end of our first week, I feel as if my brains might begin to pour out my ears.  But, after 12 hours with the patient Enmanuel, I was very clear on the difference between cabeza (head) and calabaza (pumpkin), a useful tip that will come in handy on my next trip to the Mercado, I am sure!

Flor and her parrot, Chucho. Even los papgayos drink mezcal in Oaxaca!

All trabajo and no jugar at Spanish Magic really would have been a bit much and so, thankfully, we did drink a little more mezcal, just not at descanso.  Each week, Flor organized outings for her students to local restaurants, art galleries, museums, theatres and cultural events.  In our first week, she put together a little mezcal happy hour at the school, followed by a trip to the San Pablo Cultural Centre and dinner at a traditional Oaxaqueña eatery on the outskirts of town.  Two taxis and a torrential downpour later and there we were, a gaggle of gringos and other extranjeros in a little family-run taqueria eating tlayudas, tacos and taquitos, prepared on the street and washed down with some ice-cold cervezas. Tlayudas are the crispy, frisbee-sized, tortillas served everywhere in Oaxaca.  They are usually spread with a black bean paste and topped with quesillo, the stringy, Oaxacan cheese that is similar to mozzarella, and loads of cilantro.  That night we had our first introduction to the most popular fillings for tacos and taquitos – tinga (chicken prepared with chiles, onions and tomatoes) cecina (marintaed spicy pork) and tasajo (marinated, razor-thin, grilled beef).  Surrounded by boisterous Oaxacan families, a table full of soccer players and one of the cooks, who was glued to a “novella” blaring from the TV in the corner, we had our first truly Oaxacan dining experience and loved every minute of it. 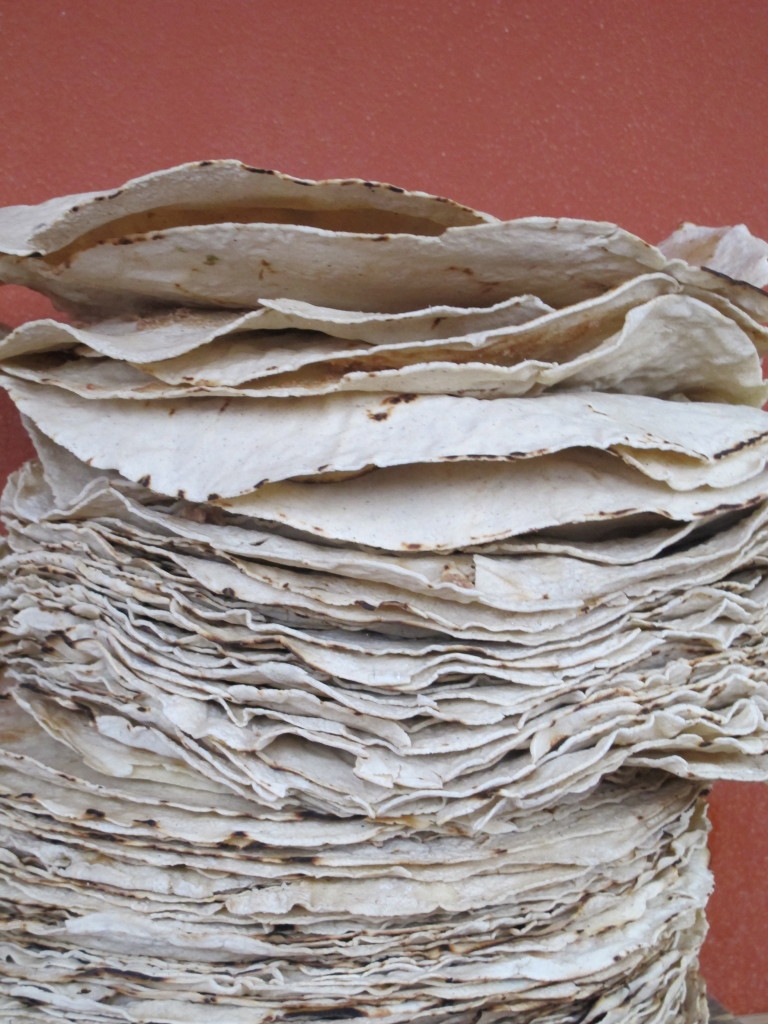 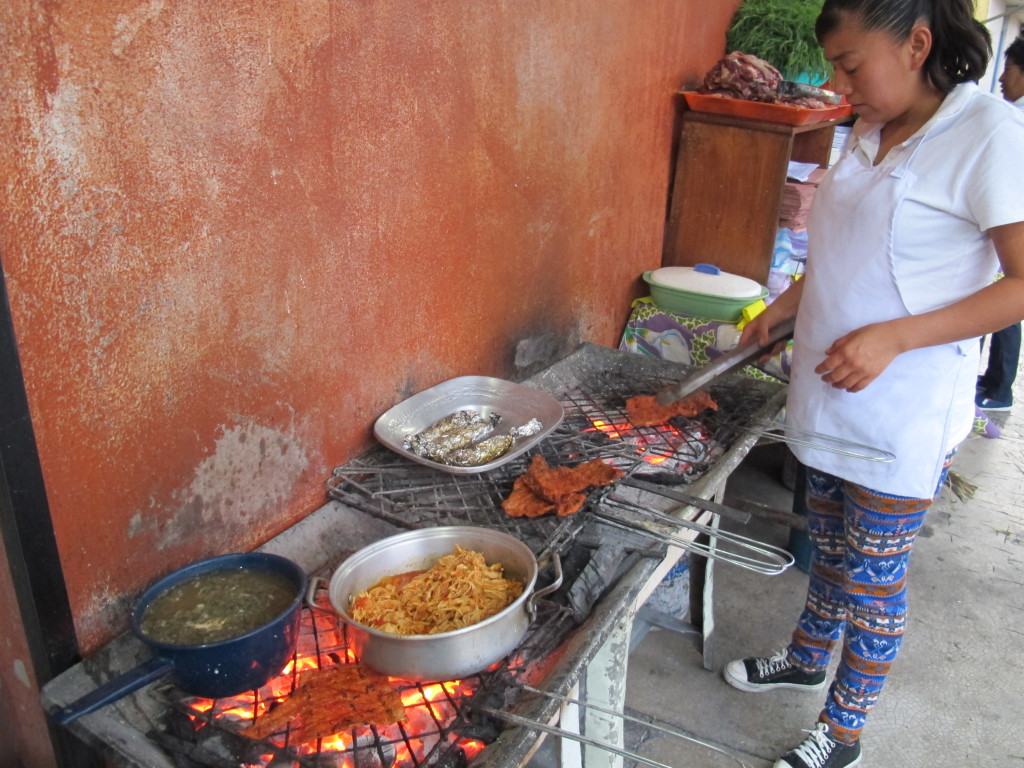 Grilling the cecina and simmering the frijoles and tinga. 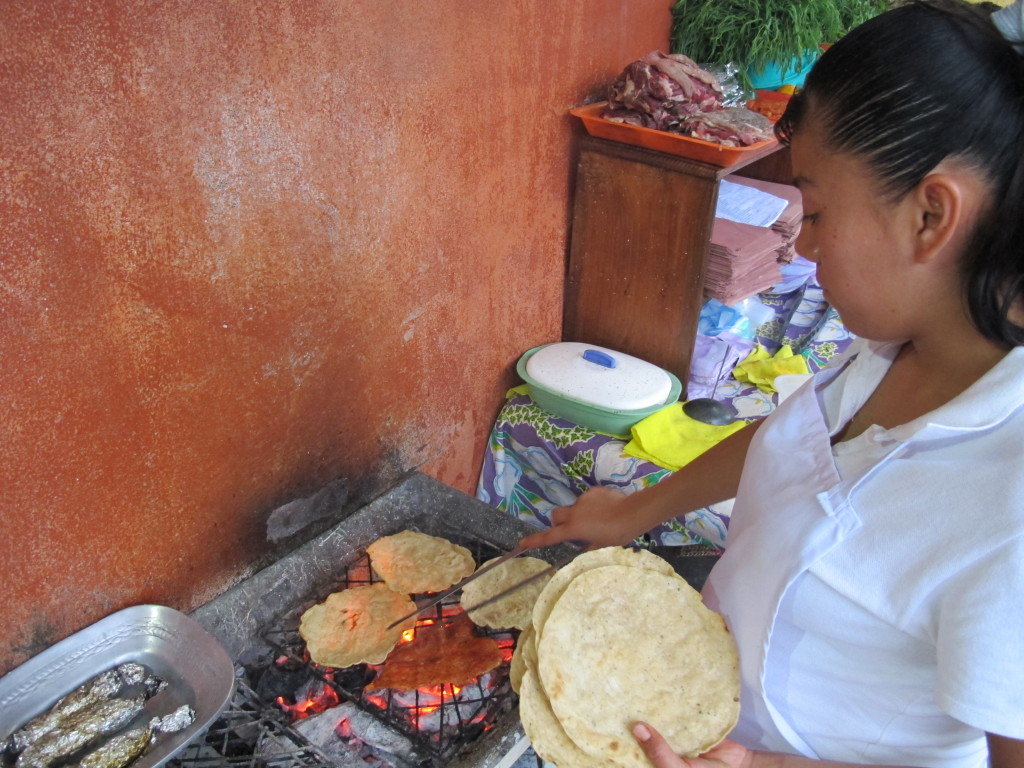 Grilling the tortillas for taquitos. 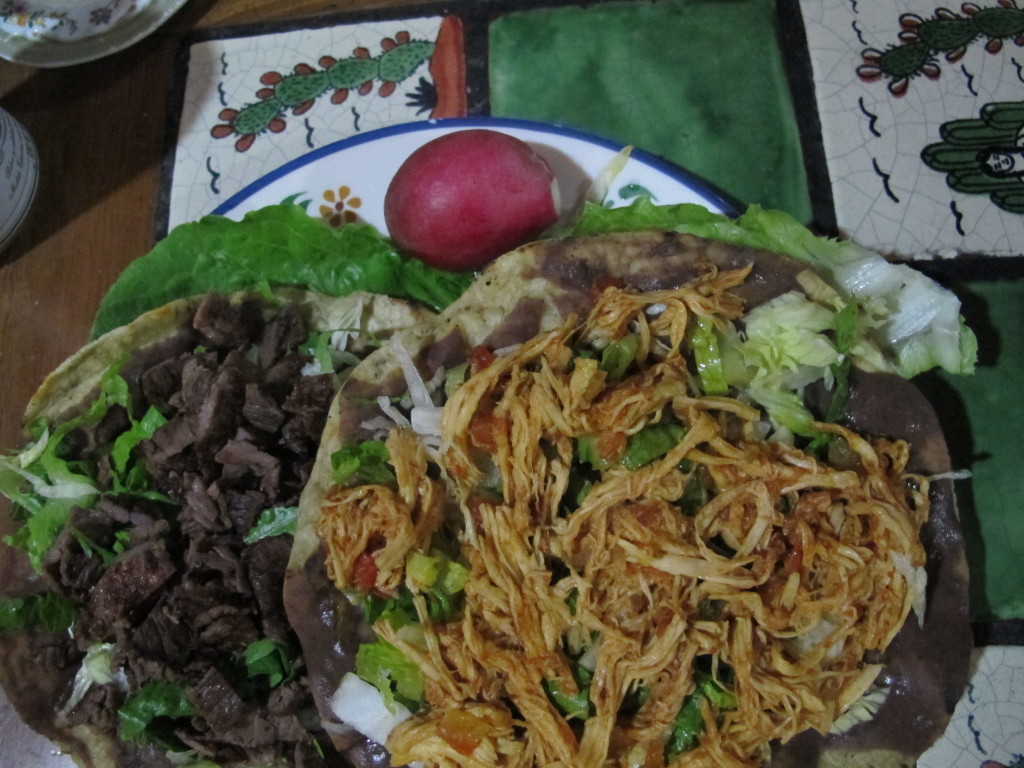 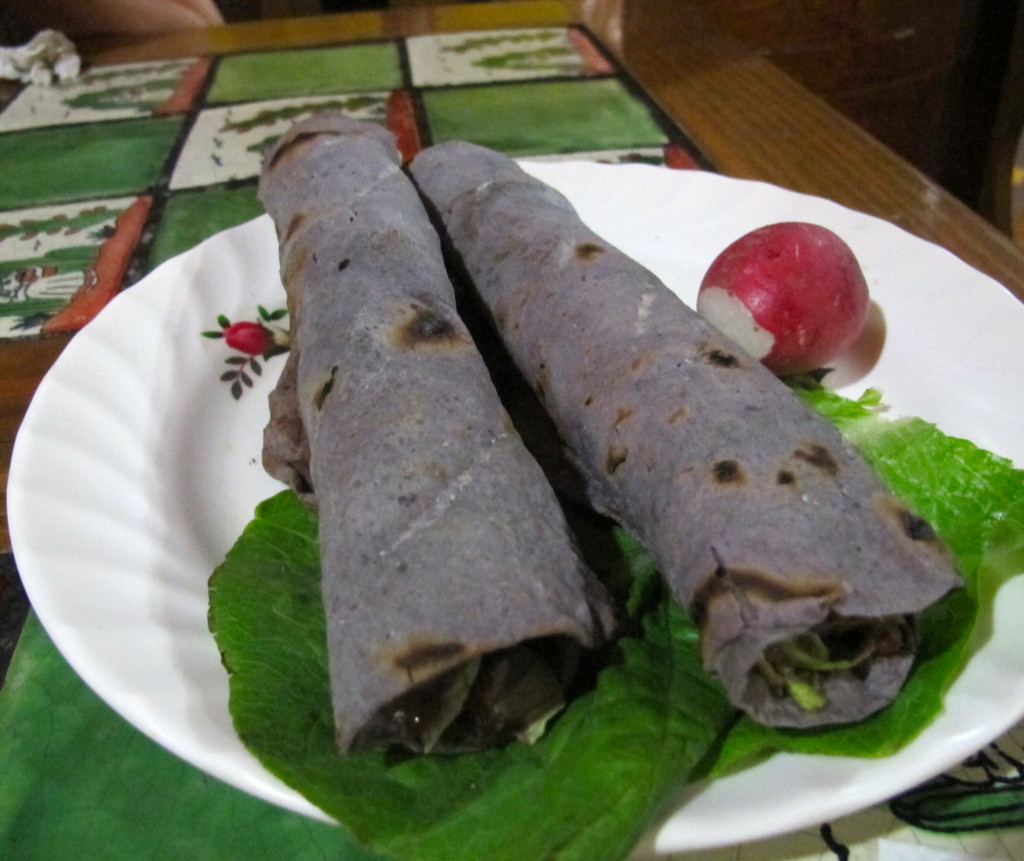 And so went our first week of learning Spanish in Oaxaca. To Flor and her team, we say gracias!   After four short days, I can confidently ask, “Donde está el mercado, por favor?”  Hopefully, week two will bring me the knowledge to comprehend the reply!