Rule #1:  In order to have the best time possible in Santiago, Chile, make sure to befriend a Chilean food blogger, food photographer, culinary specialist and all-round terrific person about six months before travelling.

Rule #2: Be prepared to eat a lot of deliciously grilled meat- Parilla-style, roast pork- aka, cerdo- salchichas, and loads of fresh seafood.

Rule #3: When you think you can’t eat another thing, never pass a Heladaria without grabbing a quick Dulce de Leche or Crema de Chocolata to go.

When Doug and I decided that the starting point for our South American travels would be Santiago, I contacted my friend Francisca Amenábar, immediately. Fran and I met at a food photography workshop in England last summer. I was doing the food, Fran was honing her photography skills. Fran and her sister Anita are the talents behind the popular Chilean food blog, Espacio Culinario. Who better to give us a crash course in all things delicious in Santiago?

After a long, overnight flight and a brief nap at our hotel, we met Fran and her boyfriend, Enrique, for our first night out on the town, Chilean-style. After touring the antiques shops of Barrio Italia, a walking tour of the city centre led us to the Santiguan institution, La Fuente Alemana for a Lomito Completo and a beer. Odd, you might think, this being Chile and all. The German Fountain? Who would have thought our first meal in Santiago would be inspired by Deutschland? Turns out that the restaurant is named for the fountain nearby that was donated to Chile by Germany upon its independence from Spain. I had read about this 1950’s style lunch counter, but, to be honest, wasn’t feeling inspired to hit a German-style eatery on our foray into Chilean cuisine. But, when Fran and Enrique suggested we drop in for a bite, La Fuente Alemana being a must on any food tour of Santiago, we wiped our minds of any preconceptions and submitted to the Completo. 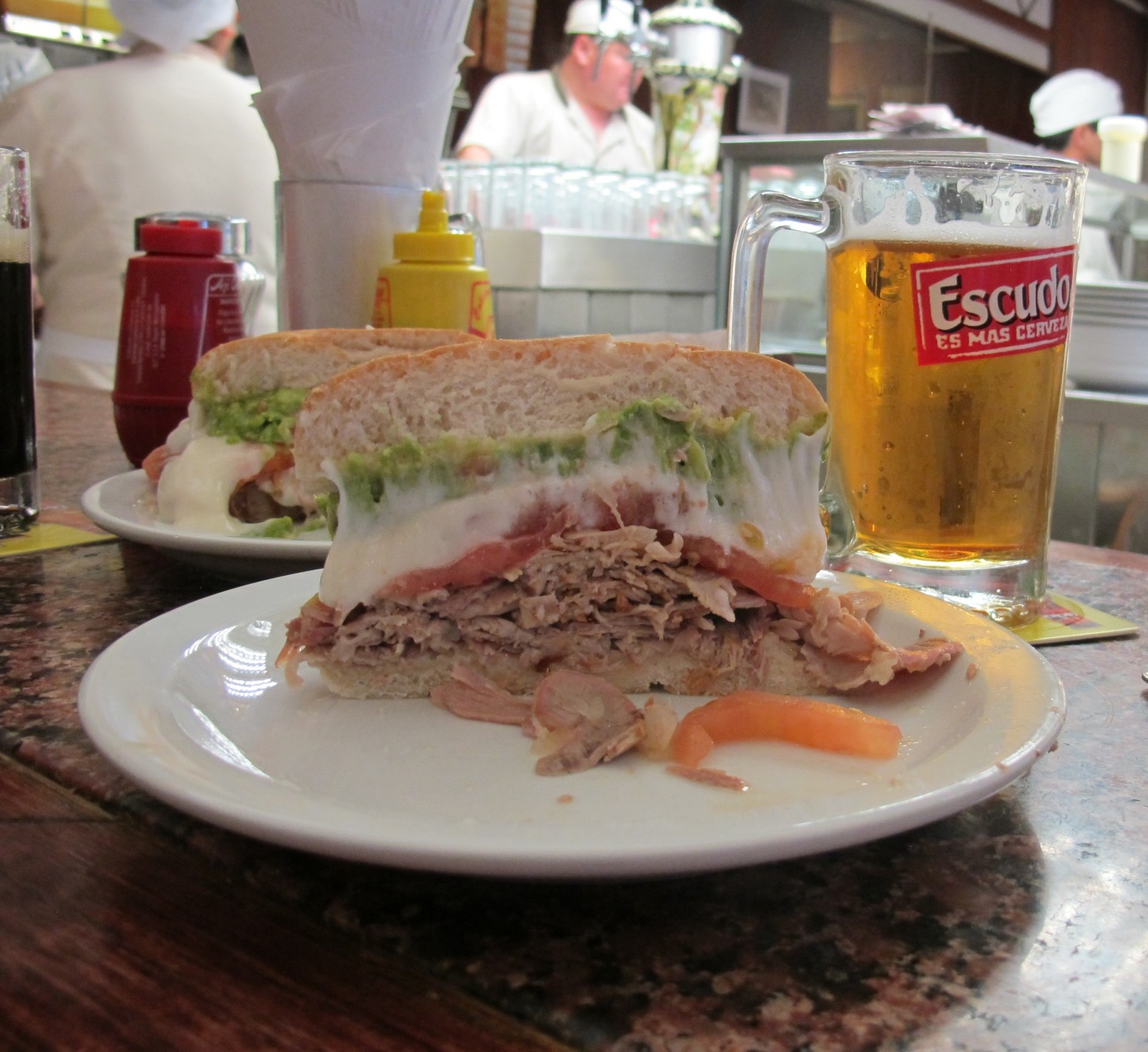 So what is a Lomito Completo, or Completo, for short? First off, the lomito is said to be the iconic Chilean sandwich– some say maybe even the unofficial national dish– a massive sandwich made from roast pork, braised for hours and thinly sliced, with a variety of toppings, on a freshly-baked soft white bun. A Completo, is actually a gigantic hot dog topped with loads of mayonnaise, avocado, tomatoes, ketchup and mustard. At La Fuente Alemana, as far as I could tell, the lomito and the completo became one as a towering sandwich, oozing with pork, mayo, tomatoes, mashed avocado and, get this… sauerkraut! Not a combo I would have thought of, but, I have to tell you, incredibly delicious. Entering La Fuente Alemana can be a little intimidating. The place is usually packed, three deep, and the only seating is at a u-shaped counter, surrounding the open kitchen where the all-women sandwich cooks, dressed in white, prepare the food.  Apparently it is normal practice to hover around people sitting in the stools at the counter until there is an opening and then to grab your seats fast. Within seconds, our order was taken and we were left to watch the cooks assembling sandwiches in unison, hardly a word spoken. No need for words, La Fuente Alemana has been in business for over 60 years and I am sure some of the cooks were there when it opened its doors. 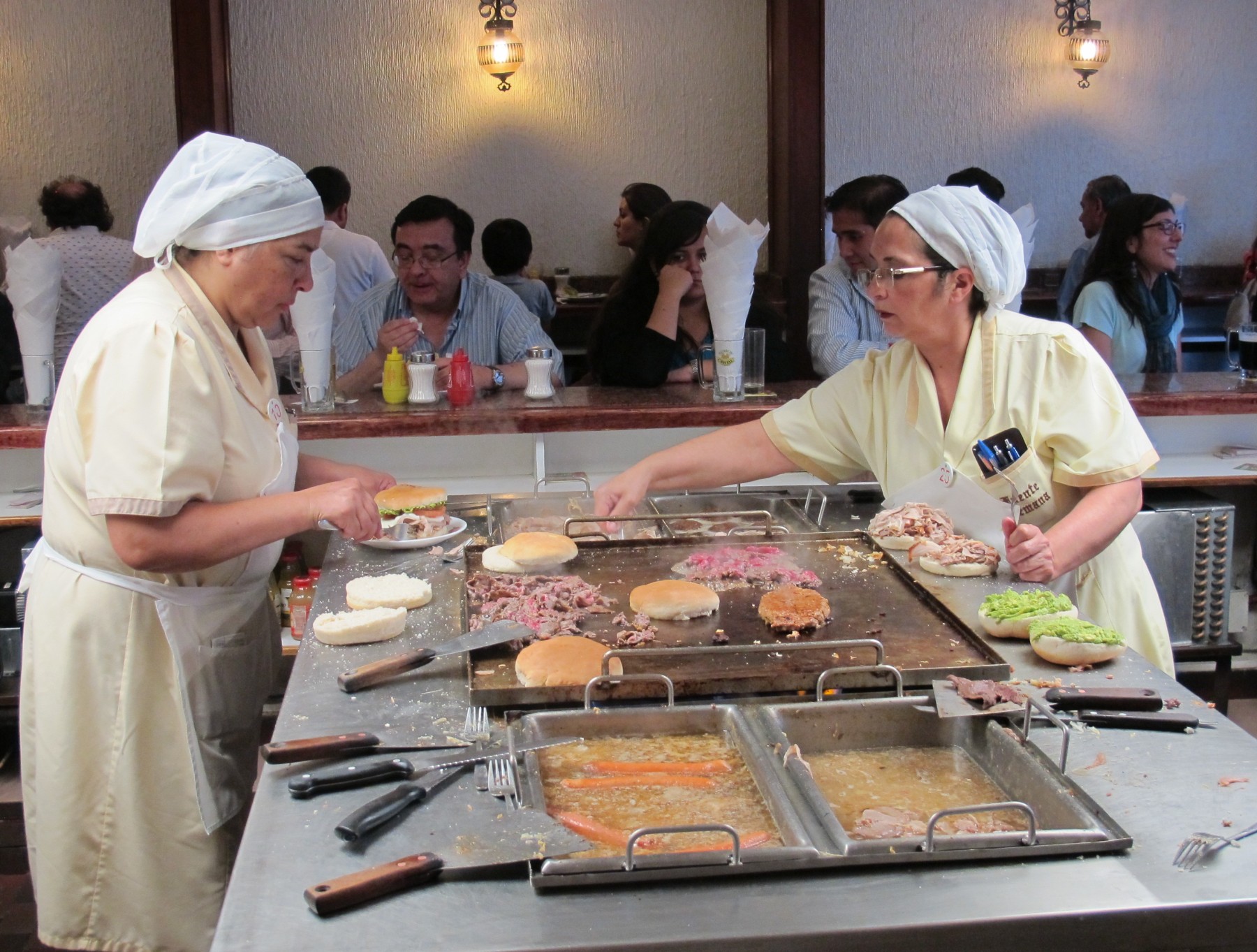 As we were really only stopping in for a snack- it was 6:30 and most Chileans don’t go out to eat until at least 9:30- we ordered two to share between all of us and four mugs of icy cold Pilsner, pulled from the tap by a towering Pilsner-meister.  After staring down the sandwich and wondering how on earth we were going to get our mouths around it, Fran advised that the only way to eat a Completo is with a knife and fork. And so with cutlery in hand, our culinary initiation into Chilean Cuisine began!

All finished with our  our pre-dinner “snack,” we decided to cruise trendy Barrio Lastarria and see what the hip crowd were up to.  After passing a trendy hot dog  joint with the Anglo-Chilean name, Hogs Salchicheria and making a mental note to go back the next day for a Completo of the hot dog variety, we checked out Bar The Clinic, a local’s pub where Santiguans debate politics and drink beer in a bar that has bras hanging from a gigantic chandelier! According to Lonely Planet, “it’s the official watering hole of Chilean political magazine The Clinic” a political satire weekly started in 1998 after the arrest of former Chilean dictator, Augusto Pinochet. The newspaper took its name from The London Clinic, aka “The Clinic,” where Pinochet was arrested. As we learned more and more about Pinochet’s horrific military dictatorship of 1973-1990, a public place where politics could be argued freely took on greater meaning. And it was packed, and loud! Unfortunately for us, there wasn’t a seat or a square inch of floor space to be had. Just time for a quick pic and off to the next stop.

I think the message is: Thieves stay outside and, basically, #@x* off! But, I’m sure there is a political context here.

We knew that Chile was one of the major wine producers on the planet, so where else to go but a wine bar that had 400 Chilean wines on the menu, with 36 by the glass? Bocanariz, the name a play on “mouth” and “nose,” both needing to be in good working order to appreciate good wine, is considered one of the best places to taste Chilean wines in Santiago. 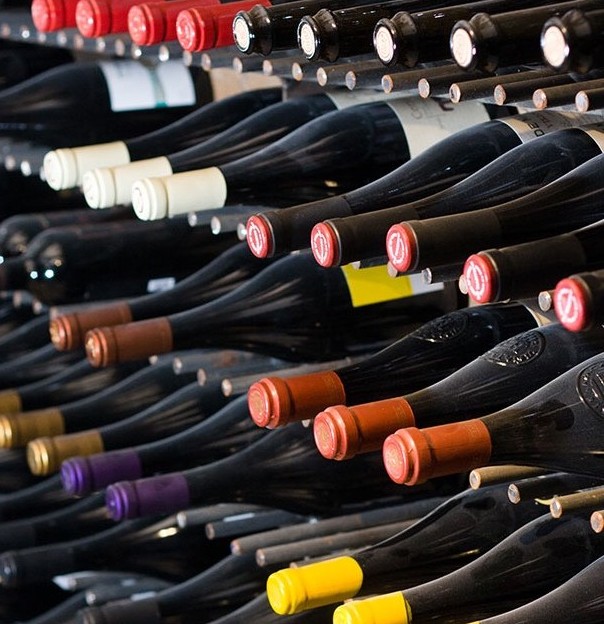 At tables filled with locals and the odd smattering of Gringos, were oenophiles and hangers-on, fully engaged in the art of wine-tasting. Being our first day and suffering from jet lag, we decided not to do a formal tasting (are we crazy?) and, instead, handed things over to Enrique who ordered us a beautiful Chilean red and a sampling of some traditional cured meats and cheeses. 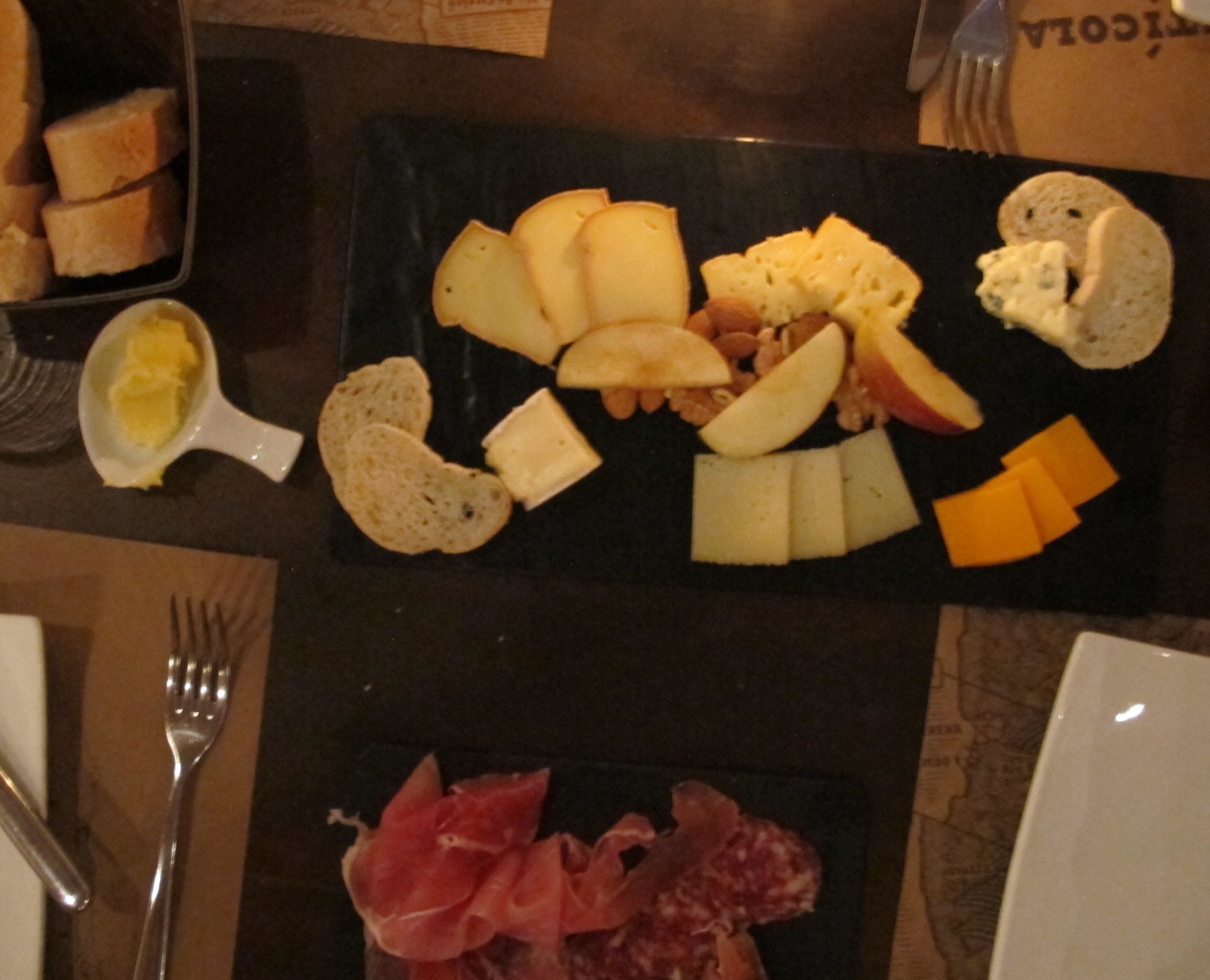 Que perfecto!  Next visit, we will try to work our way through the wine list or maybe one of the many tasting flights! And so in a bit of a wine haze, Fran and Enrique led us to the subway station.   As we blundered our way home to a good night’s sleep, we looked at each other and said in unison…we’re in SANTIAGO!

How I spent my Costa Rican VacationIf you hadn’t already figured this out about me, food and cooking have been the…December 1, 2015

Eating Chile- Part 2When we are in a new place and want to get a feel for the…February 2, 2015