If you hadn’t already figured this out about me, food and cooking have been the dominant theme most of my life. For example, when the other girls were outside playing hopscotch or baseball, I was at the kitchen table creating recipe cards, pouring over the Better Homes and Gardens New Cookbook– completely engrossed in the double-paged spread in the Family BBQ section- or trying to figure out how to make cream puffs from scratch. It was like that when I was a kid. It’s like that now.

So, as you can imagine, when I was a kid, lounging on the couch after school watching one of my favourite TV shows about a ship-wreck on a desert isle, I was more interested in solving a culinary puzzle than in the romantic storyline of that particular episode of Gilligan’s Island.  And, unlike all the other kids who were willingly suspending their disbelief when Maryann appeared in her gingham dress with a dreamy coconut cream pie for the Professor, I sat trying to solve the puzzle, crack the culinary code, unravel the threads, as it were, of the big question; how the heck did she pull it off?

Where did she get the equipment? That cute apron? Those ingredients? I mean, I could figure out the coconut part, that was easy, but the sugar, the flour, the butter? Who takes all that on a “three-hour tour?”

As I said, food has always been a central focus for me, so you will understand my need to pull a “Maryann” on our recent trip to Puerto Viejo, Costa Rica. Staying in a pretty little casita beside the Caribbean surrounded by coconut palms, was just too much of a temptation. So, one afternoon I made my way into town, past the white sandy beaches filled with the normal tourists who were soaking up the sun, to buy my ingredients. 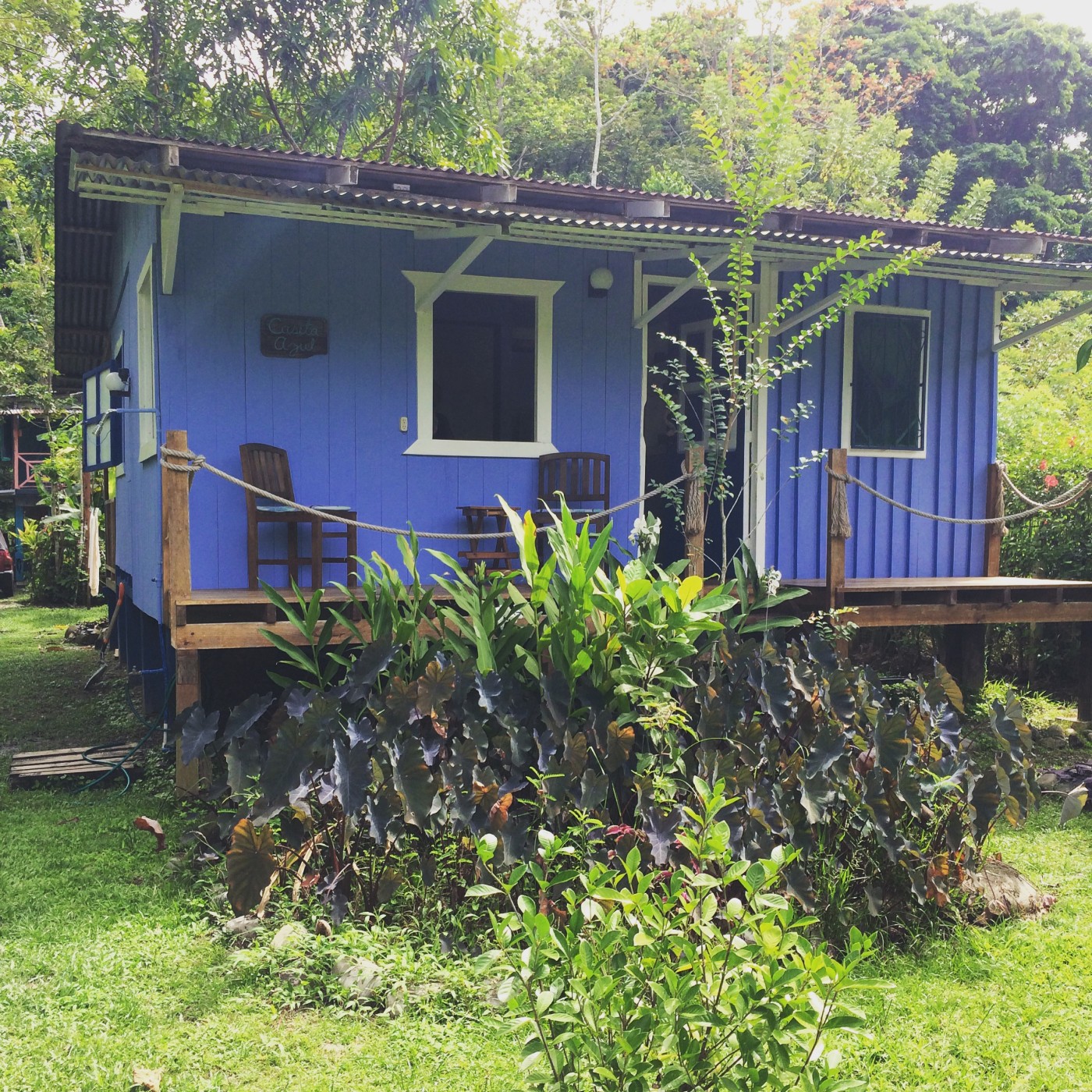 First stop, a fresh coconut, which I actually purchased at a butcher’s shop underneath a vegan restaurant, run by a Costa Rican who had lived in Canada for 18 years, but that’s another story. Luckily, I had the foresight to ask the butcher to crack it in half for me. Next stop, the little grocers down the street to slightly torture a young shop clerk with my endless requests for help in finding the various “ingredientes.” After a near-disaster buying sour cream instead of whipping cream, I lugged everything back to the hottest kitchen on earth to bake my first-ever-from-scratch-with-a-fresh-coconut, coconut cream pie. Did I mention that the temperature was 38 degrees Celsius and 100% humidity?

Step one- the pastry. Well, the pastry was a breeze, but baking the pastry blind posed a bit of a problem seeing as I had neither parchment paper nor dried beans. Luckily, the casita had an inordinately large fridge/freezer, so I just threw the unbaked crust in the freezer to chill for a little while and then popped it into the counter-top oven, which I had moved onto the back deck of the casita as the temperature in the kitchen had begun to hover around 50, give or take. Step two- the filling. The custard was really no problem at all, but I have to tell you, there is a bit of a knack to getting the coconut meat out of the shell. After struggling for what seemed like an hour, I finally pulled up a Youtube video and things moved along very nicely. Rule Number One- if you can’t figure it out, somebody has probably made a video! 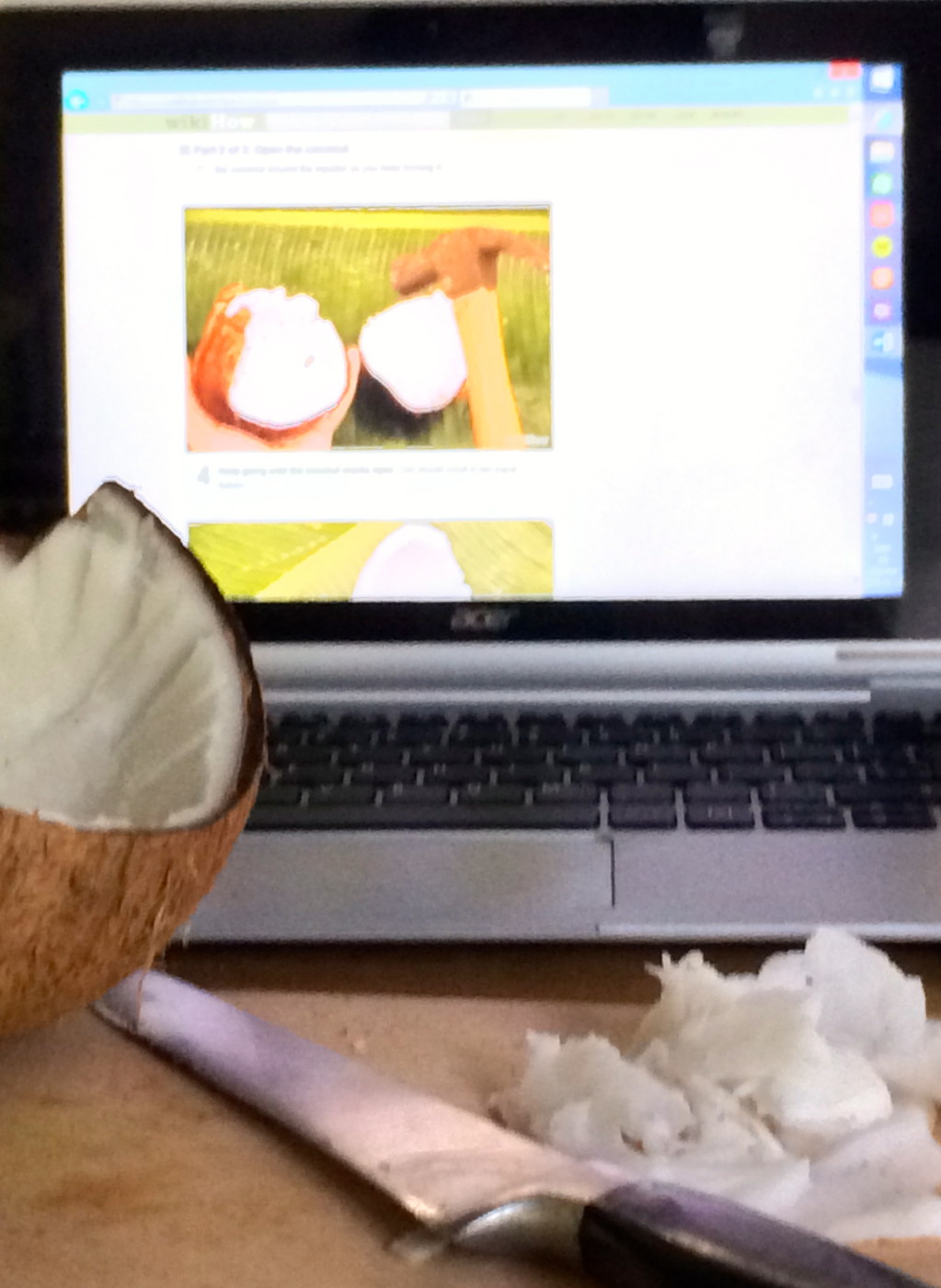 Once out of the shell, the coconut meat required a little more work than the sharpest, that is to say not sharp in the slightest, knife in the kitchen could muster and so I bunged everything into the blender. In went the coconut meat, coconut milk, flour and cream, a few blasts of the motor later and out poured a beautiful coconut emulsion.  Heated on the hotplate, then whisked into the egg yolks and voila; a perfect coconut custard.   Pouring the custard into the cooled pie shell I made sure to leave a little in the bottom of the pot and while the custard set, I sat on the back stoop savouring every last drop. I am sure that Maryann would have approved.

After topping my pie with whipped cream and toasted coconut, I proudly carried it over to our Spanish teacher’s house where we were having a casual Spanish lesson while cooking dinner and drinking some very nice Chilean Chardonnay. Luis, our Chilean teacher and Almut, his German wife, who run a hotel and language school in Puerto Viejo had also invited a Costa Rican carpenter friend to join us. Before serving the pie, I, of course, had to tell them the whole Maryann/coconut cream pie/Gilligan’s Island story. You want to talk “lost in translation!” The more I tried to explain in my pidgin Spanish, the worse it got.  Nobody had a clue what I was talking about, except Doug, who was doing his best to salvage the story, but more importantly, to move things along so we could get to cutting that pie.   All of a sudden, a lightbulb went off and Elias, the Costa Rican, turned to me and with a glint in his eye and a little smirk, said quietly, “Meester Howell?” “Meesus Howell?” Giiillllleeegan?” and in that moment, a stranger became a friend. Which just goes to show, lounging on the couch watching sitcoms isn’t the worst thing a kid could do.  Thanks, Maryann… thanks, Gilligan! 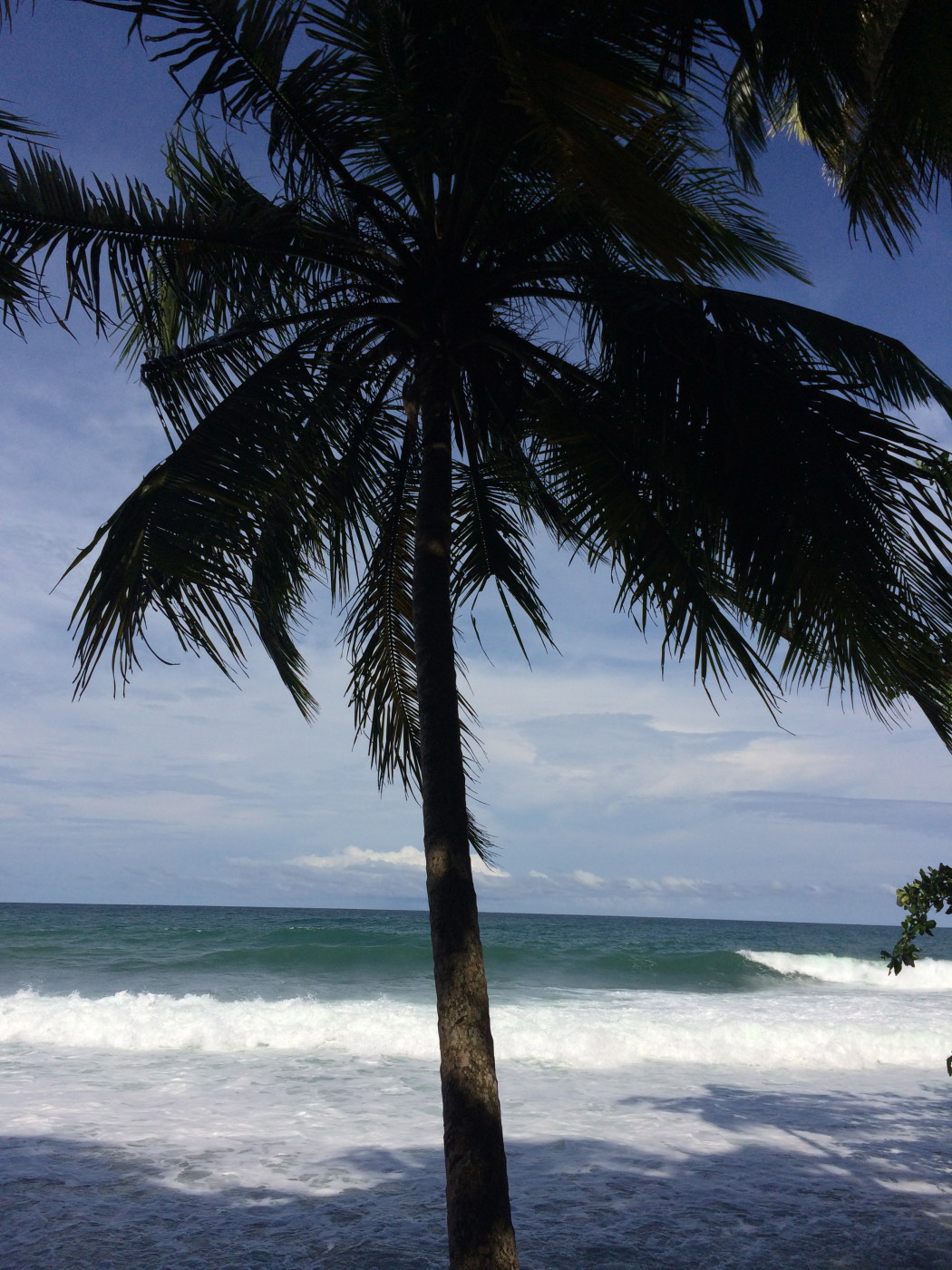