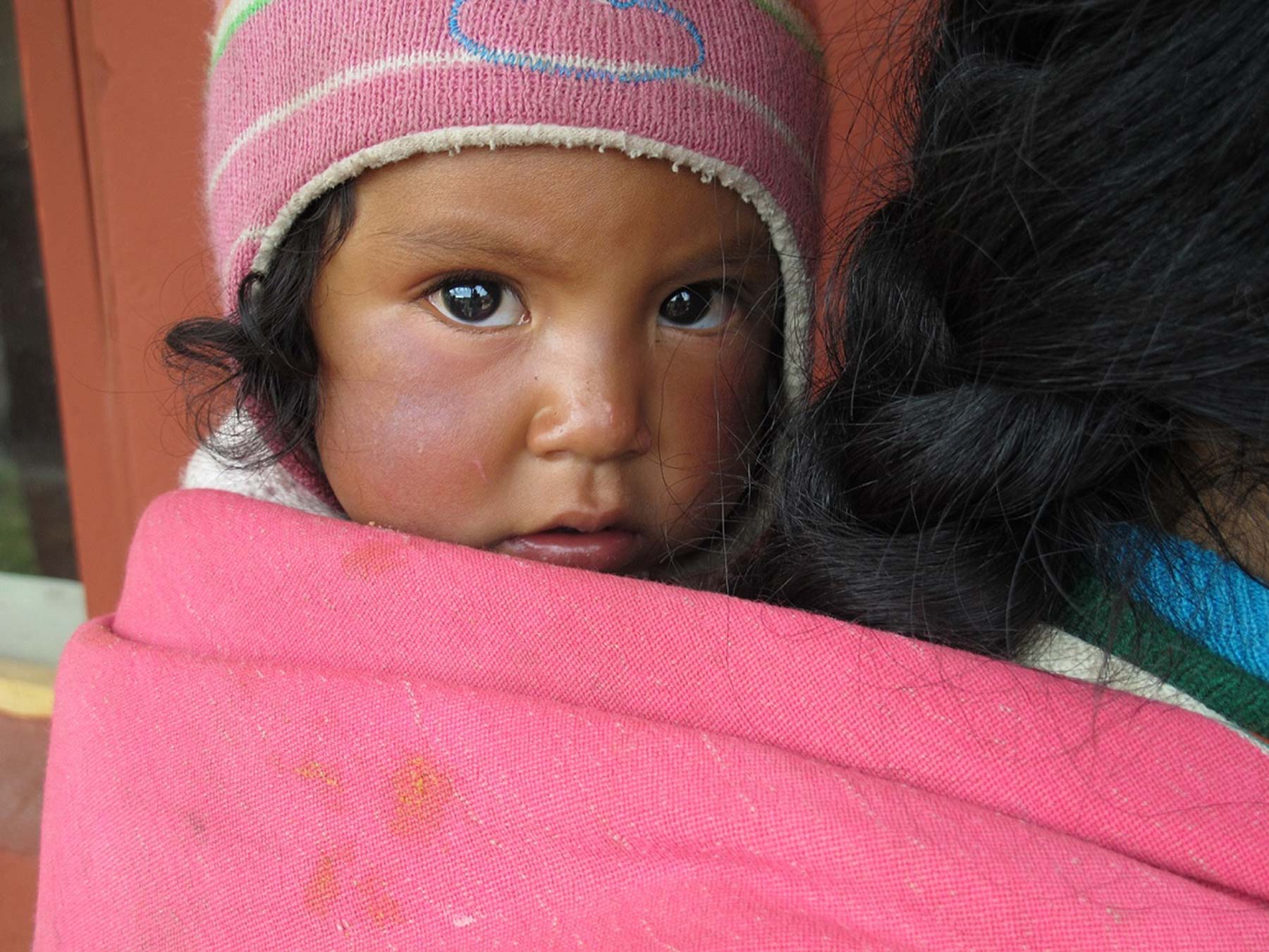 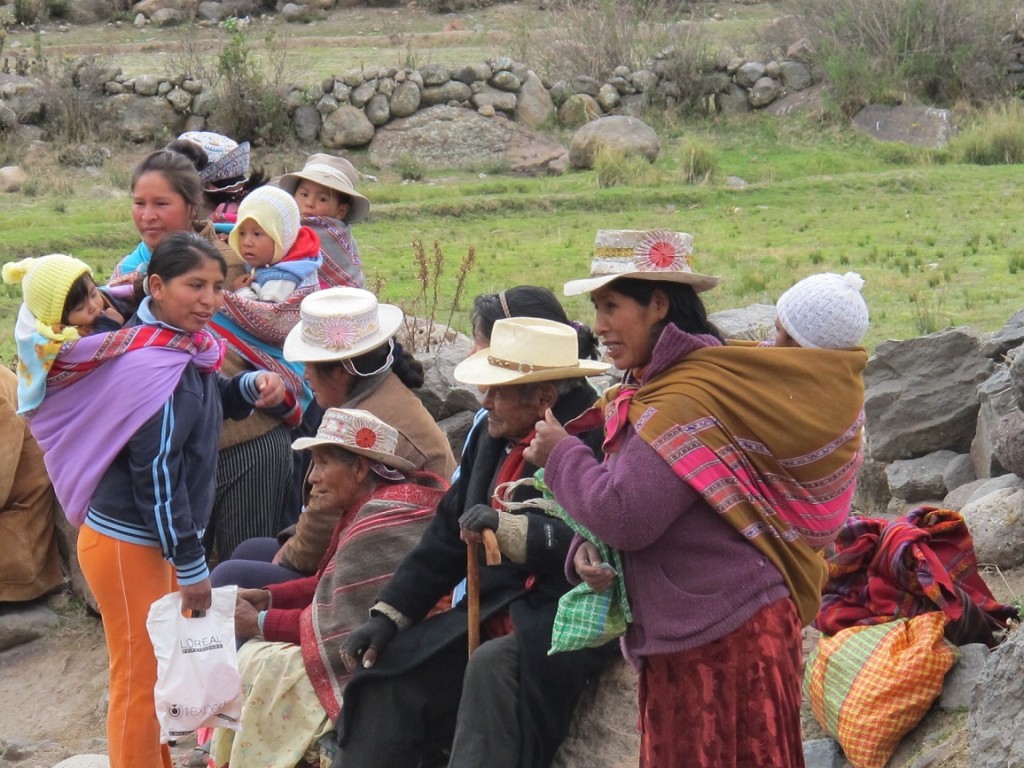 Early this morning, even earlier than this usually happens, I was awakened to the sounds of a loudspeaker announcing something in rapido Espanol.  Often, trucks will drive through a neighbourhood announcing “platinos, papayas, paltas, narrrrrranjas” over and over and over, full blast, at what seems to me to be an ungodly hour.  In reality, most people here have probably been up and working for a couple of hours, and Doug and I are probably the last two people still lounging in bed in this bonito Andean pueblo.

Today when I heard this, I just figured it was a fruit vendor, so I pulled on my eye mask, rolled over and tried to go back to sleep.  No good!  It was getting louder and the announcer’s voice was being drowned out by the high-pitched squeals of niños.

“OK, I better check this out,” I said to myself, and so I opened the curtains in our hotel room at the Killiwasi Lodge and saw hundreds of children running through the fields across the way.  I look at my watch and its only 5:30.   What the heck?   At first, it looked to me like the kids were on an Easter Egg Hunt, but then I saw a long line of parents waiting outside a small building on the other side of the field.

Last night, while we were sipping pisco sours in a little café on the square in Yanque – there will be more on this later, as I have formed a bit of an addiction- the owner’s son told us excitedly that Papa Noel was going to be visiting en la mañana and that there was going to be a Chocolatada.  Chocolatadas, extravaganzas of hot chocolate, panettone, and regalos– presents- are held around South America por Navidad, sometimes in schools and at other times for entire communities.   As part of their annual Christmas party, Up Close Bolivia held a terrific Chocolatada at the pre-school in Mallasa just before we left Bolivia, and the kids loved it, so I definitely wanted to check this one out.

I quietly dressed and snuck out of the room, trying not to wake Doug, who was hoping to sleep off a whopper of an Andean cold.  Heading for the growing line of kids and mothers, most dressed in the traditional clothing and hats of the region, I was stunned by the number of people who were waiting at the gate of the hotel, too many for me to count.

I noticed a man taking pictures so asked him “que pasa?”   to which he replied In clear English, “my family is hosting a Chocolatada for the town.”    “Wow,” I exclaimed “necissita assistar?” or something like that, which was not correct Spanish at all, but he got it and responded “si, si, si” and led me through the gate and into the back where two huge vats of hot chocolate were simmering over an open fire, attended by a beautiful Collagua woman.  Collagua and Cabana are the two indigenous peoples in the Colca Valley and pre-date the Incas. 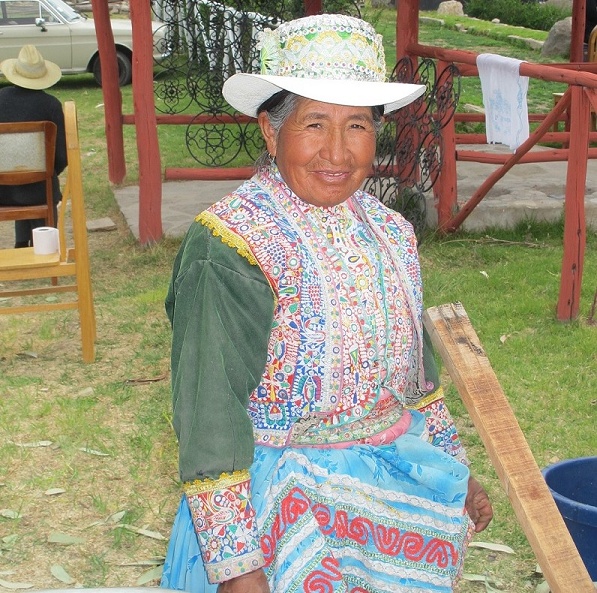 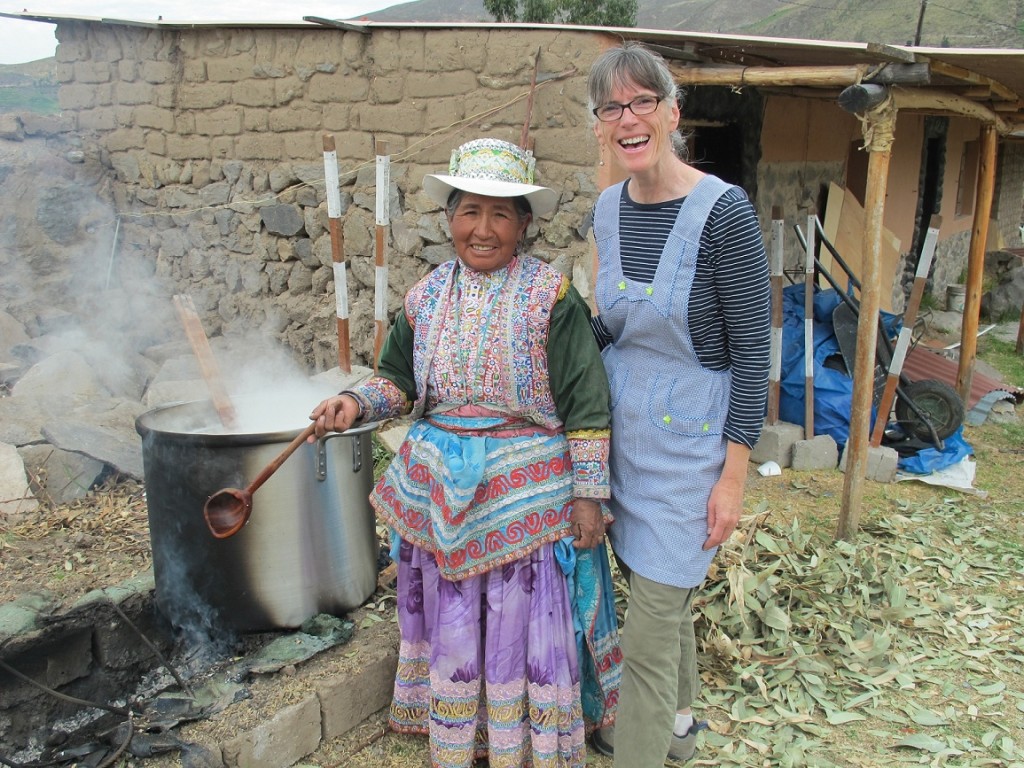 I was immediately welcomed by the extended family of grandparents, mothers, fathers, aunts, uncles, cousins, and children.

“Cual es su nombre?” I was asked by who appeared to be the matriarch of the familia.

“Bienvenidos, Aleeson,” she shouted over the blaring Christmas music and gave me a huge hug.  She then proceeded to introduce me to everyone.

The family, who are from Arequipa, have been hosting this event in Yanque for the past ten years at what was once a small hotel, but is now, I later learned, the country house of Dr. Giovanni Salar, the man I first met.  He and his six brothers and their families provide the funds and host the event.  It’s a huge under-taking, but everyone seemed to know their roles and were being given directions over a loudspeaker, in between Jose Feliciano singing Feliz Navidad and Bing Crosby’s White Christmas, while the growing throngs waited outside.

Each person is served hot chocolate and given Christmas presents- toys to the children and clothing to the adults.  According to Gaby, Giovanni’s daughter, who spoke excellent English, the entire family knows their responsibilities, but she was thrilled that I had offered to help because they were short this year.

“Hey, I can get more help. I’ll be right back,” I said, and flew across the field to get Doug, who I knew would hate to be missing this. Straight out of bed and off to a Chocolatada

It was an unbelievably wonderful morning.  The children were so adorable and everyone was so appreciative.  The children were funneled into lines, first to receive a gift, and then hot chocolate.  I was in charge of crowd control, dividing the niños and niñas into separate lines. 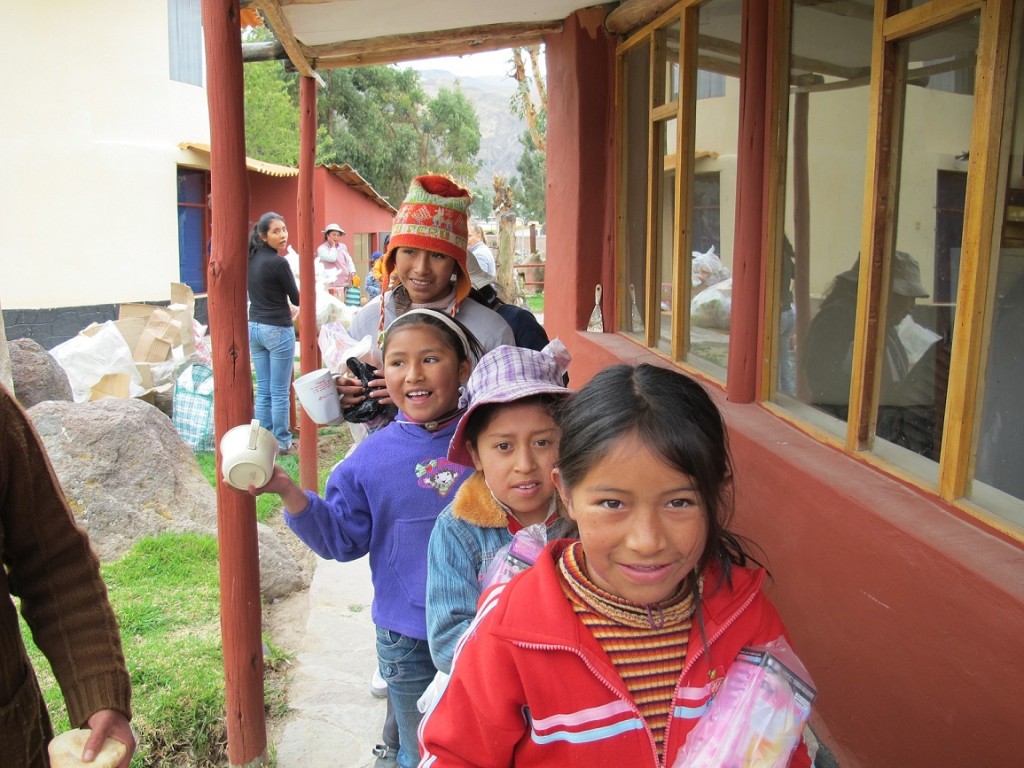 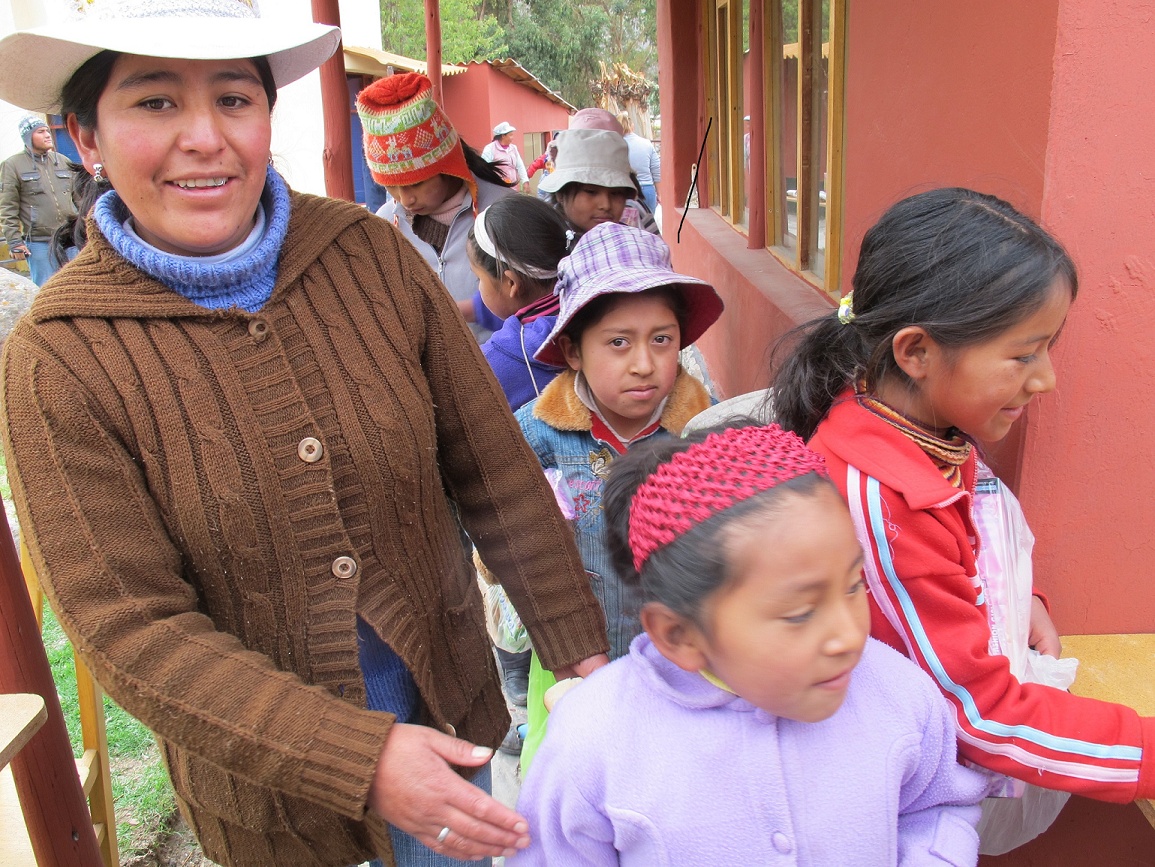 Vanessa, a lovely woman who works at our hotel, Killawasi Lodge, and her daughter Leonella.

Dugla helped serve the hot chocolate.  Everyone brought their own cups- some used cups, others pop bottles, baby bottles and even small pots. 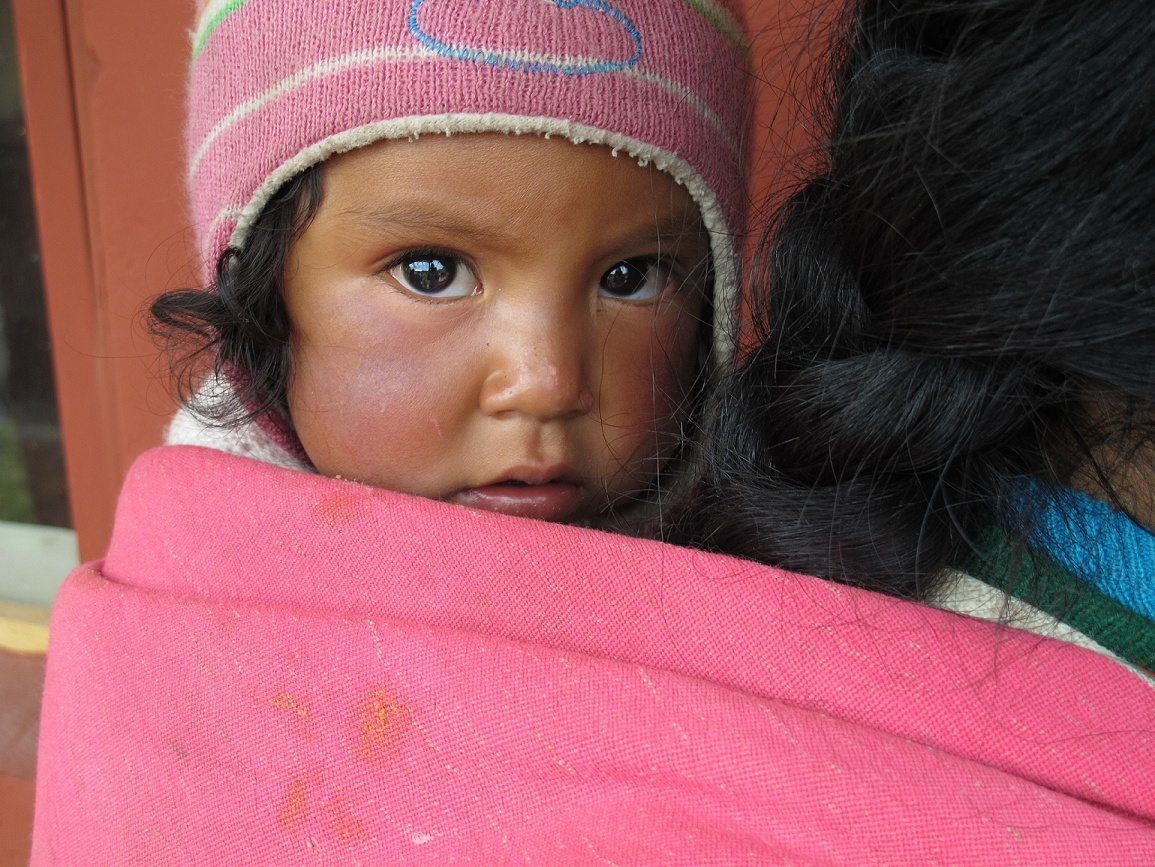 Eyes the colour of chocolate and heart-melting.

Perhaps the most touching moments of the morning were when we served the elderly people of the community, each carrying their little cups.  The women, weathered and wearing traditional clothing, and the men in their sombreros and sandals, many using canes, reached out to take our hands or to give us a kiss. 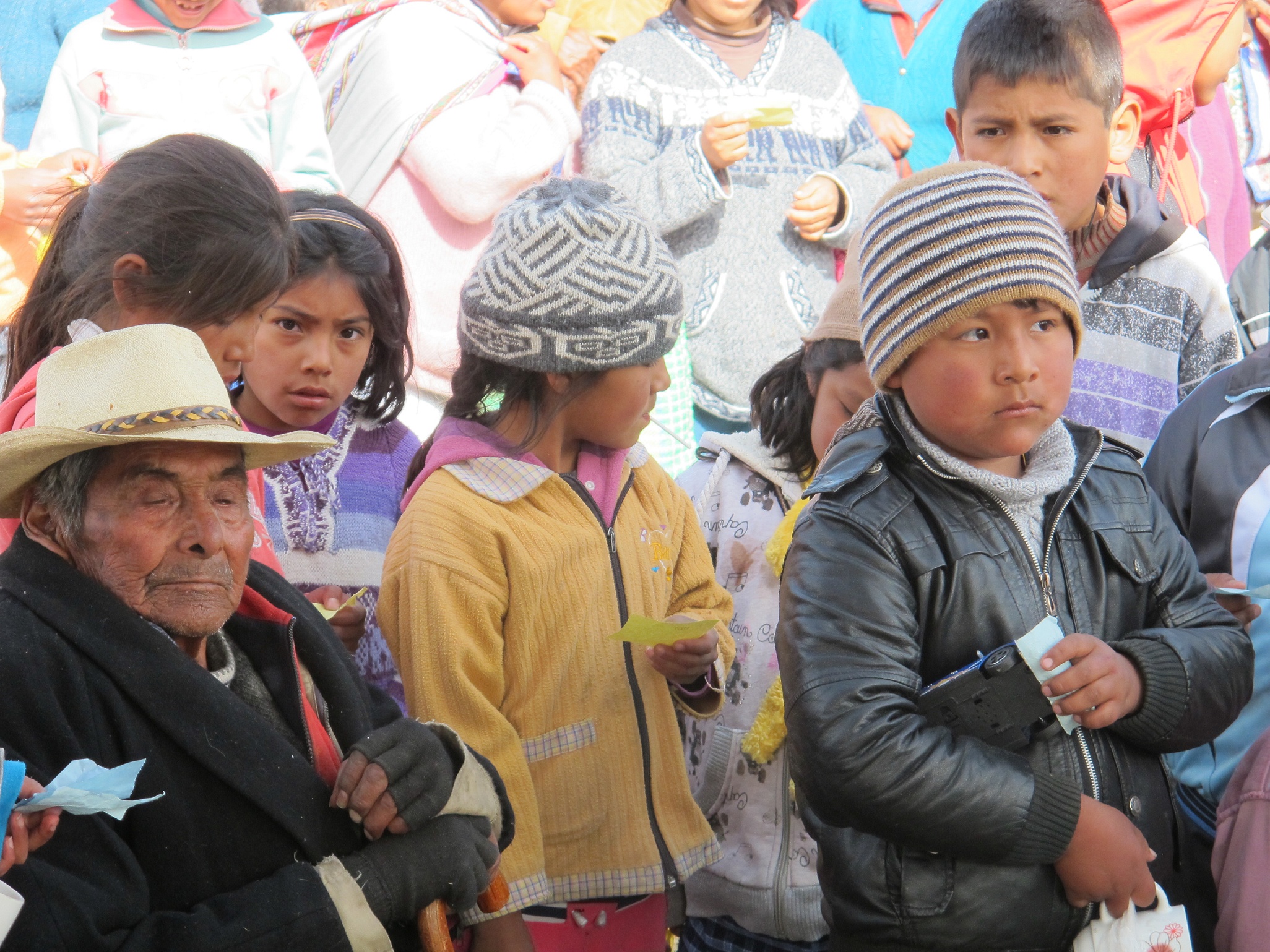 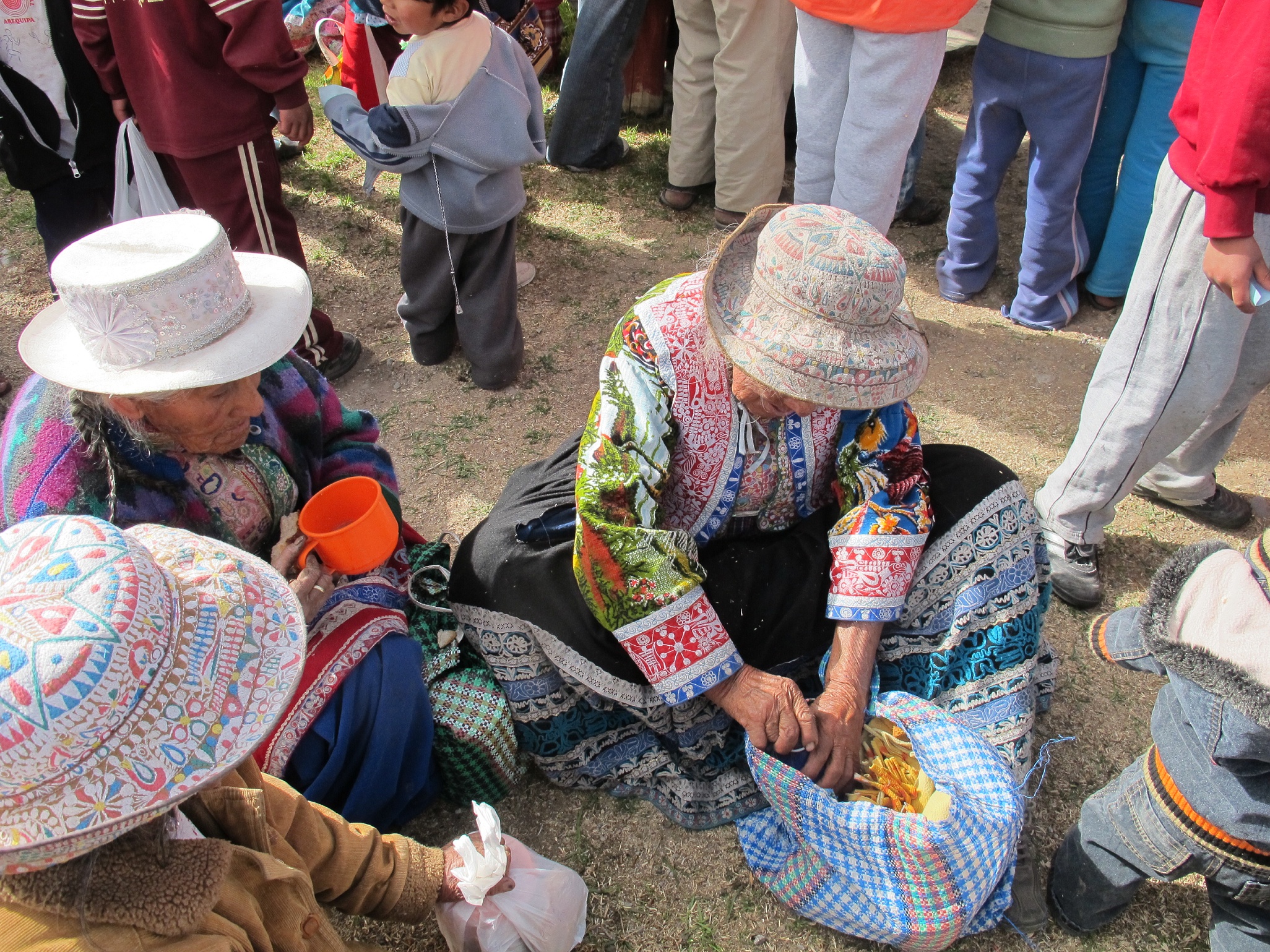 No seats required at a Chocolatada 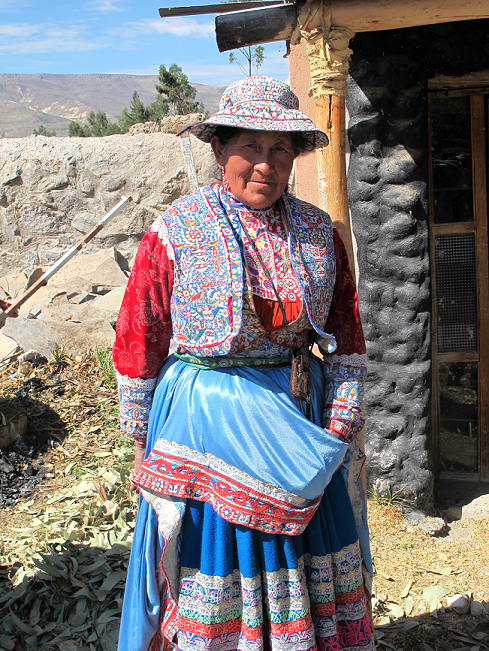 Really, it is us who should be saying “muchos gracias.”  It was an amazing experience and we both felt so privileged and grateful to have been a part of it.

And so to Giovanni Salar and his family,and to all the people of Yanque, Peru, Doug and I say a huge gracias and Feliz Navidad. 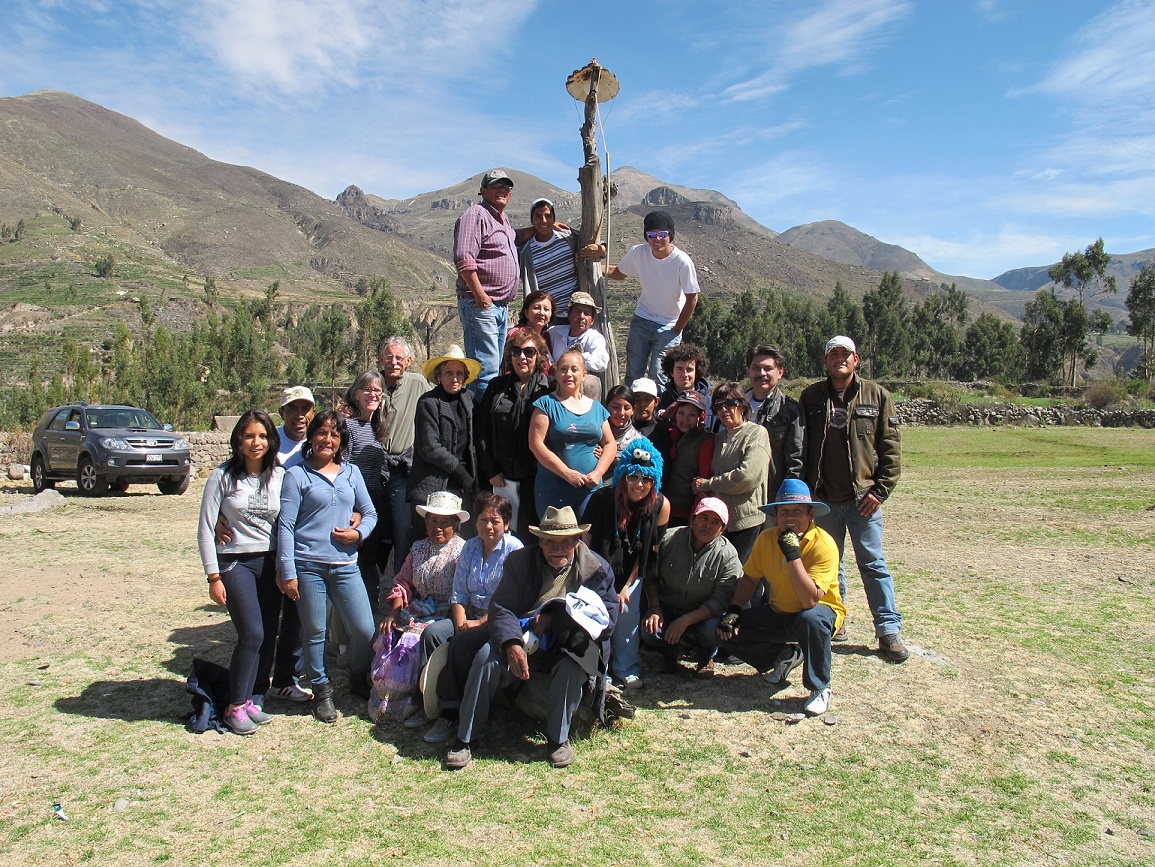