Something that I suspect helps to make a blog good- the thing that has people on the edge of their seats waiting to read a new post- aside from the highly entertaining script, is that the stories are posted fairly regularly and in a fairly organized manner. I mean, if you are following someone’s blog, don’t you kind of want the stories coming at least once a week?  I am sure there must be some kind of protocol in the blogging world on this, but I am resisting the urge to Google it!  To be honest, even calling myself a “blogger” seems a little pretentious, having been at it such a short time.  So, I am going to give a justification, of sorts, for not being a better blogger and posting things as they happen- we are having such a blast and so many great things happen every day that I’ve fallen behind.  So, without further ado, let’s jump back a month and talk about the amazing experiences we had while volunteering with Up Close Bolivia…

Once we figured out where we wanted to go, who we wanted to help, and, in turn, which organizations wanted us, we boarded our American Airlines flight from Calgary to Bolivia.  Twenty three hours, and more than one bad meal later, Doug and I landed in La Paz, about to embark on our first volunteer placement of the trip.

After a couple of days of acclimatization in La Paz, which included one massive altitude headache, followed by a few doses of Diamox and some ibuprofen, we made our way to our new home with Up Close Bolivia.

“Up Close” for short, is a family-run, community-based, non-profit organization located just south of La Paz.  Founded by British-born Emma Donlan and Boliviano, Rolando Mendoza, both former volunteers with years of community and international service under their belts, Up Close Bolivia’s mission is steeped in the philosophy of “reciprocidad” a belief central to Andean culture.  According to their website, which you really need to check out, reciprocidad is all about “giving back and contributing in a way which enriches both the person who is giving and the person who is receiving equally.”

Through Up Close, Emma and Rolando certainly do that.  Reciprocity is demonstrated in numerous ways through projects which include, supporting a pre-school, running after school programs in two locations, organizing a weekly football club, offering English classes to the community, providing tour guides and support at the Mallasa Zoo, various environmental projects, supporting a Mother’s Club and beautifying the community with murals.  I’m sure I have missed other great projects, because it seemed to us that Emma and Rolando always had something on the go and were exploring new ways to give back to and to support their community.  All this while holding full-time jobs, sitting on community committees, hosting great gatherings at their home and raising two great kids, David and Bell! The Mendoza-Donlan Clan, sin Rolando, who is taking the picture: Emma, David and Bell and our new friends, Jeremy and Paula dropping be for Happy Hour in our dining room!

While part of Up Close, Doug and I lived in the little village of Jupapina, within view of La Paz, where the organization is based, and spent our days at the Valley of the Moon- Valle de la Luna- Children’s Centre, about 3 km up the road in Mallasa.   On a beautiful piece of land, in the shadow of a magnificent peak known as the “Devil’s Molar” and above the “Valley of the Flowers,” sits the Mendoza-Donlan home, a central hub where the family welcomed us regularly for dinners or special events, a quick chat over a cup of real English tea or a Bolivian cerveza, a chance to share one of David’s amazing bowls of popcorn, or to be regaled with one of Bell’s wonderful stories.   Next door are three small houses that can accommodate up to 12 volunteers and below this, a newly-developed and beautifully landscaped camp-site with an open kitchen and an adorable A-Frame cottage- our home. 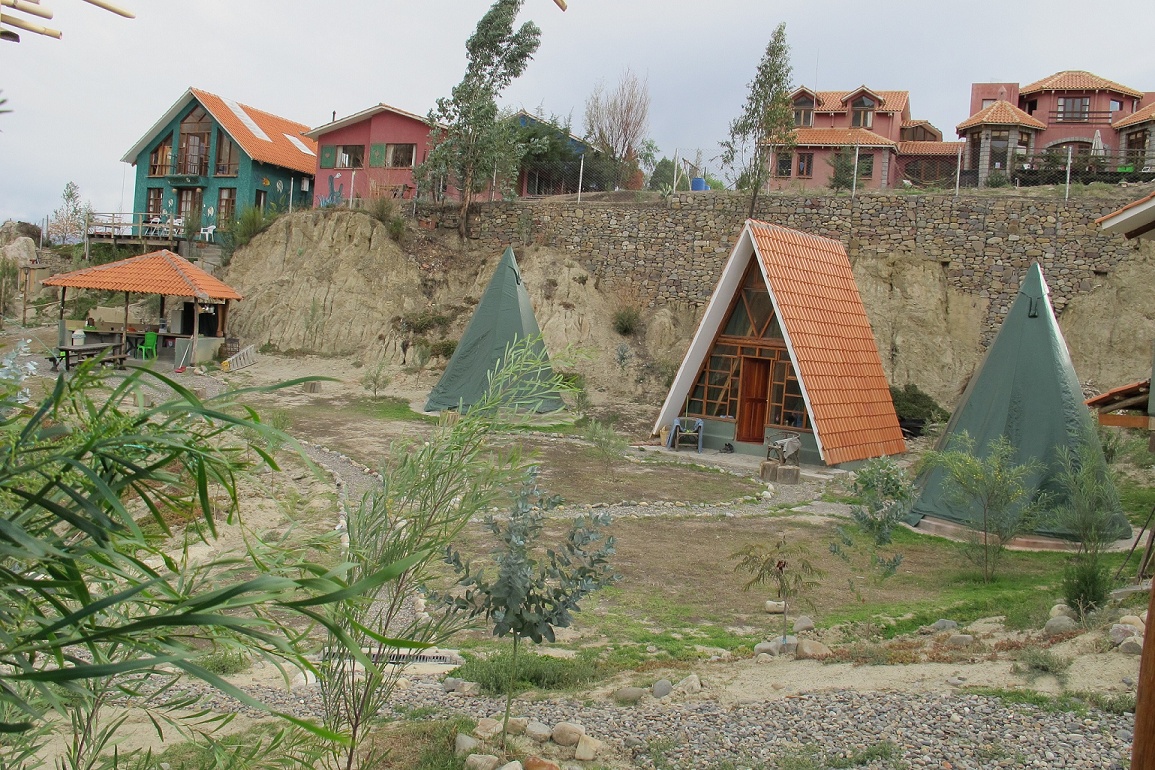 The Up Close “village” in Jupapina, Bolivia

While we were with Up Close, eight other volunteers, all from Britain, lived on-site.  With an average age of 22, we were easily the oldest volunteers by about 39 years! I am sure they must have wondered how on earth they ended up sharing their gap year with people the same age as their parents, but luckily, Doug and I are young at heart (read- fairly immature) and so I don’t think the age difference was glaringly apparent.  Robin, Hussein, Josh, Harriet and Katrina were all part of the British International Service Program and managed, in partnership with Up Close, by Naomi, a talented young British woman with a beautiful singing voice and perfect Spanish.  Two other volunteers who were there independently, like us, Alice and Sarah, also both from the UK, rounded out the team.

Every morning, Doug made the coffee over our little gas burner and we enjoyed our breakfast al fresco with a million dollar view.  Most evenings, we cooked in an outdoor kitchen, but often we weazled our way into an invitation to Paula and Jeremy’s digs up above.  Paula and Jeremy, British journalists on a two year (so far) trip through the Americas, joined Up Close in a slightly different capacity as part of the “Work Away” program.  They spend their days working the land and on marketing/promoting the soon-to-be campsite- Camping Colibri.  Paula and Jeremy became great friends and even taught Doug a new language- British!  He is now quite fluent and can easily incorporate terms like “vest” and “knickers’ into every day conversation.  Read about their adventures on a great blog called SeventeenbySix at http://seventeenbysix.wordpress.com/category/bolivia/

Up Close also has three terrific Bolivian staff- Anahi, Anita and Raquel- all beautiful, enthusiastic, caring and fluently-bilingual young women, who coordinate the volunteers and the projects. They did everything they could to make our stay in Bolivia terrific, whether it was interpreting for us, helping us find the best place to buy our favourite ingredients, giving us rides into La Paz, or photo-copying recipes for the Mother’s Club at the last minute each week.  In fact, everyone treated us like gold. 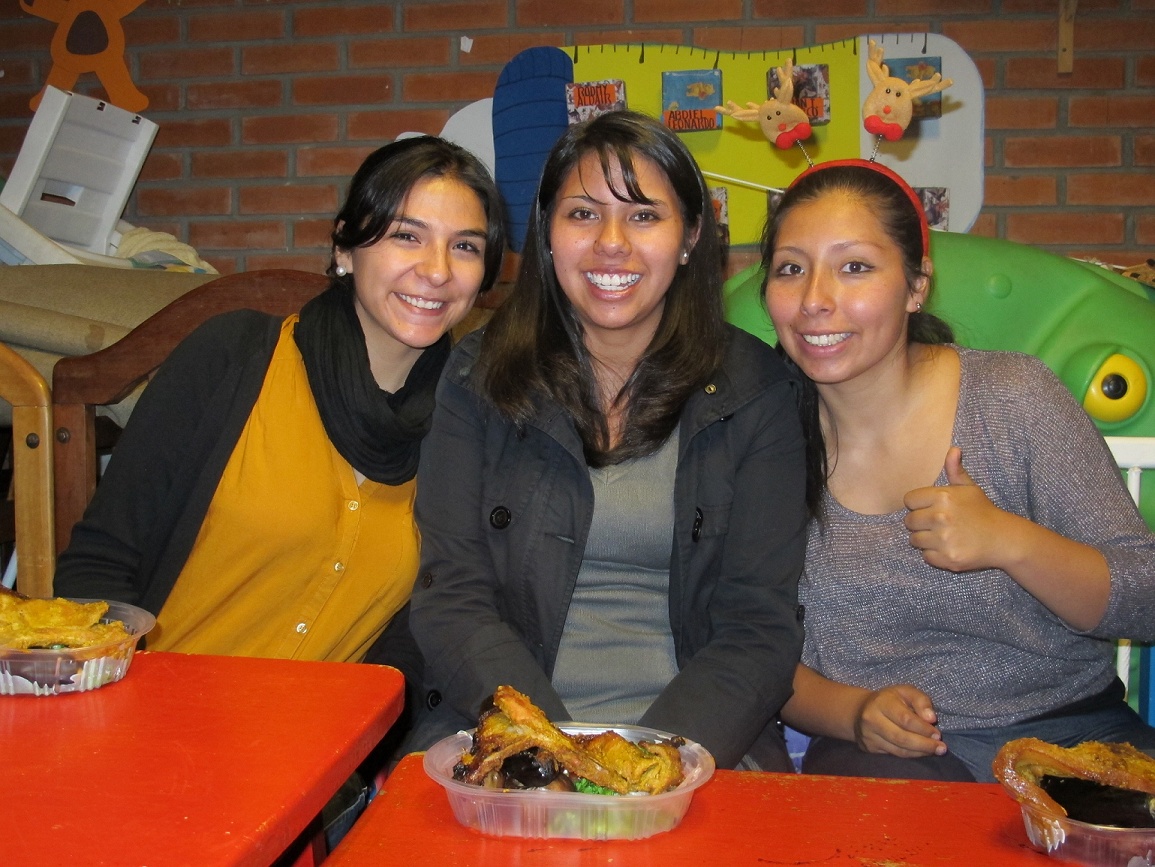 Our main responsibilities with Up Close were to work at the children’s centre, me in the kitchen helping to make lunch for 80 ninos and conducting weekly cooking classes for the Mothers’ Club, and Doug, building a greenhouse and doing a few other carpintero projects.  The staff at the pre-school were incredibly kind and welcomed us with open arms. We became great friends with the cooks, the teachers, or as they are called in Bolivia-tias, and the administrators.  Working in the kitchen with Maxima and Maria brought me the privilege of eating lunch with many of the staff and Doug, because he was my esposo,  joined us on our little stools every day at lunch, too. 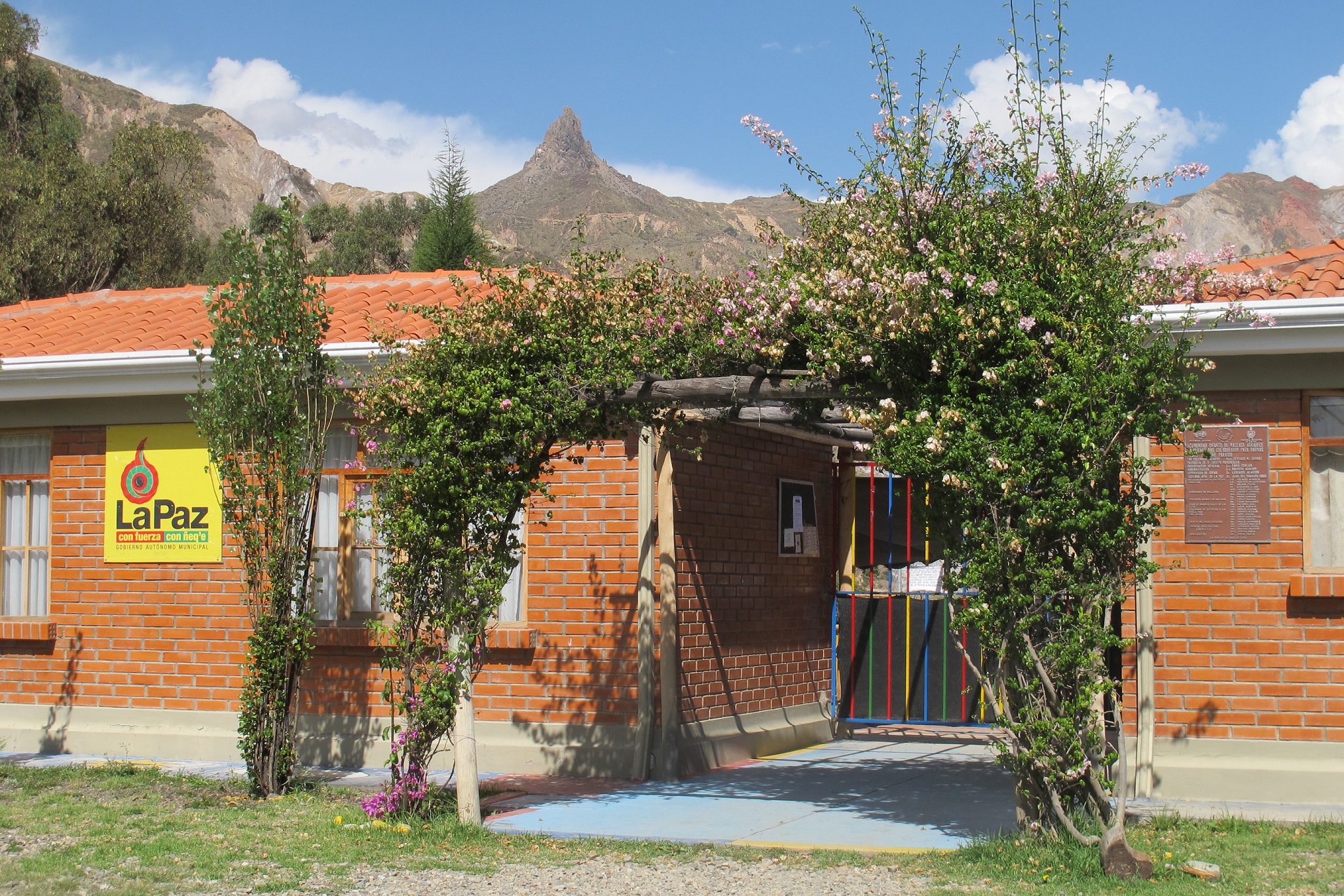 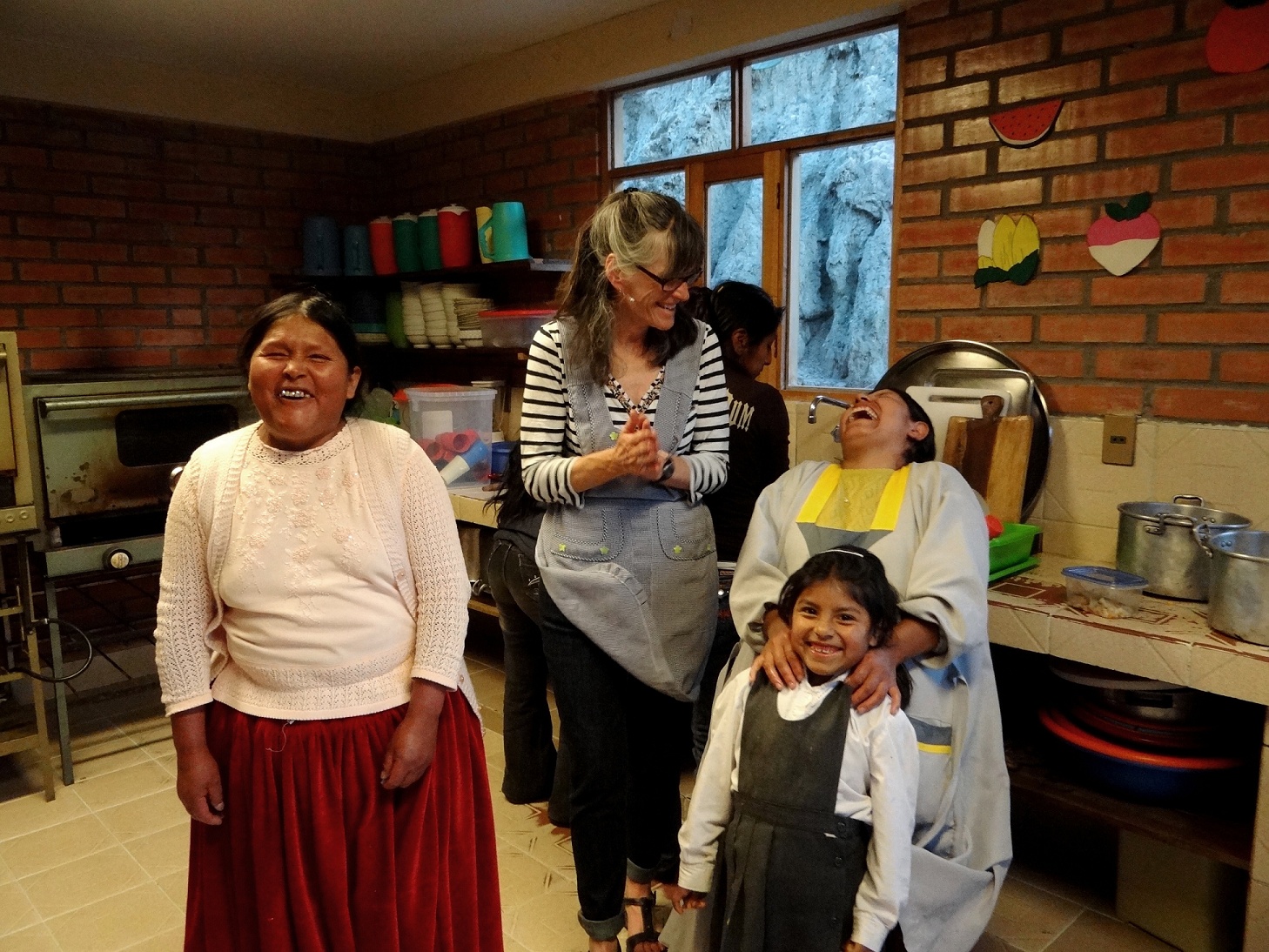 Doug making Maxima, Maria, little Patty and I laugh our heads off. 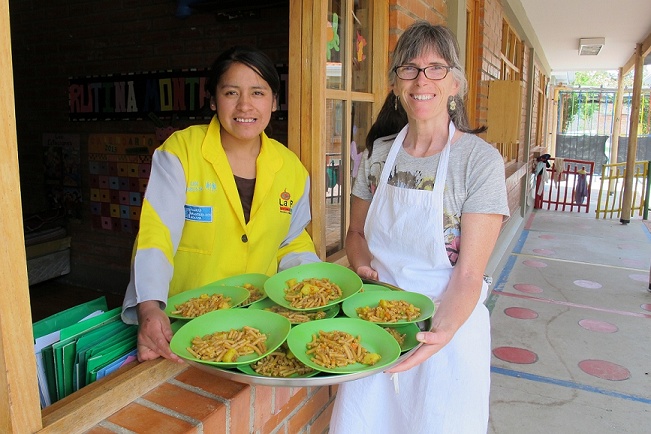 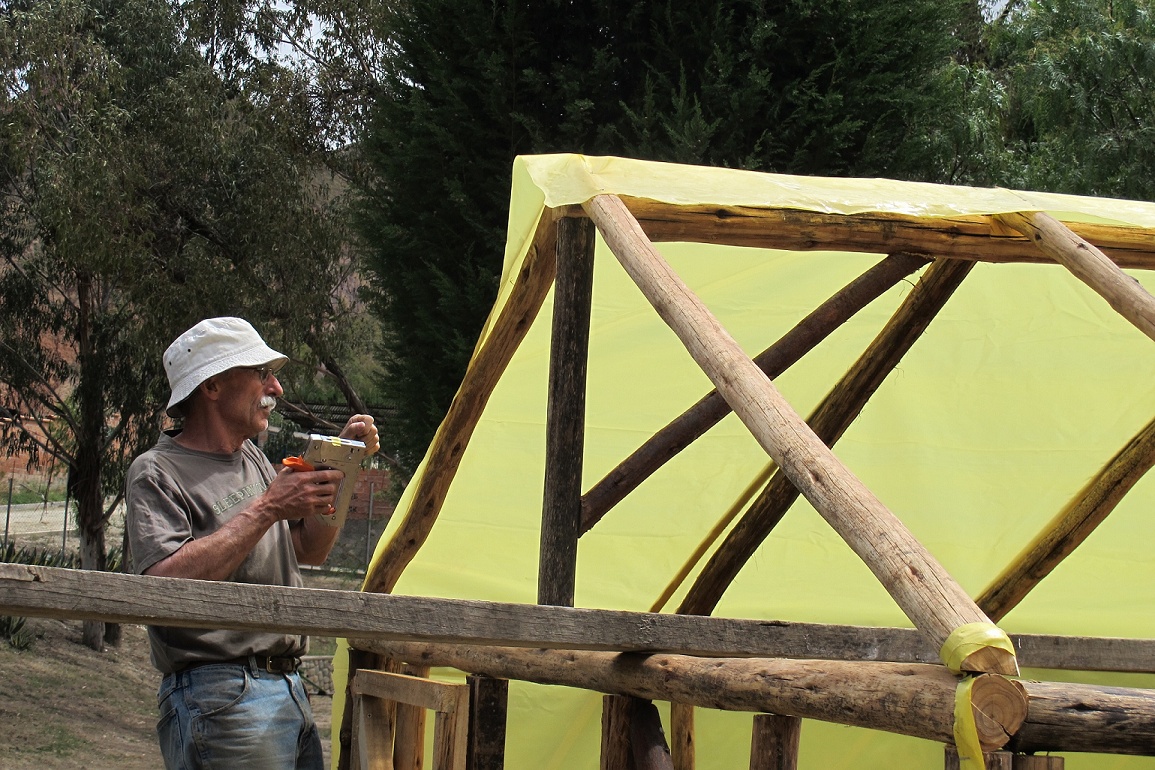 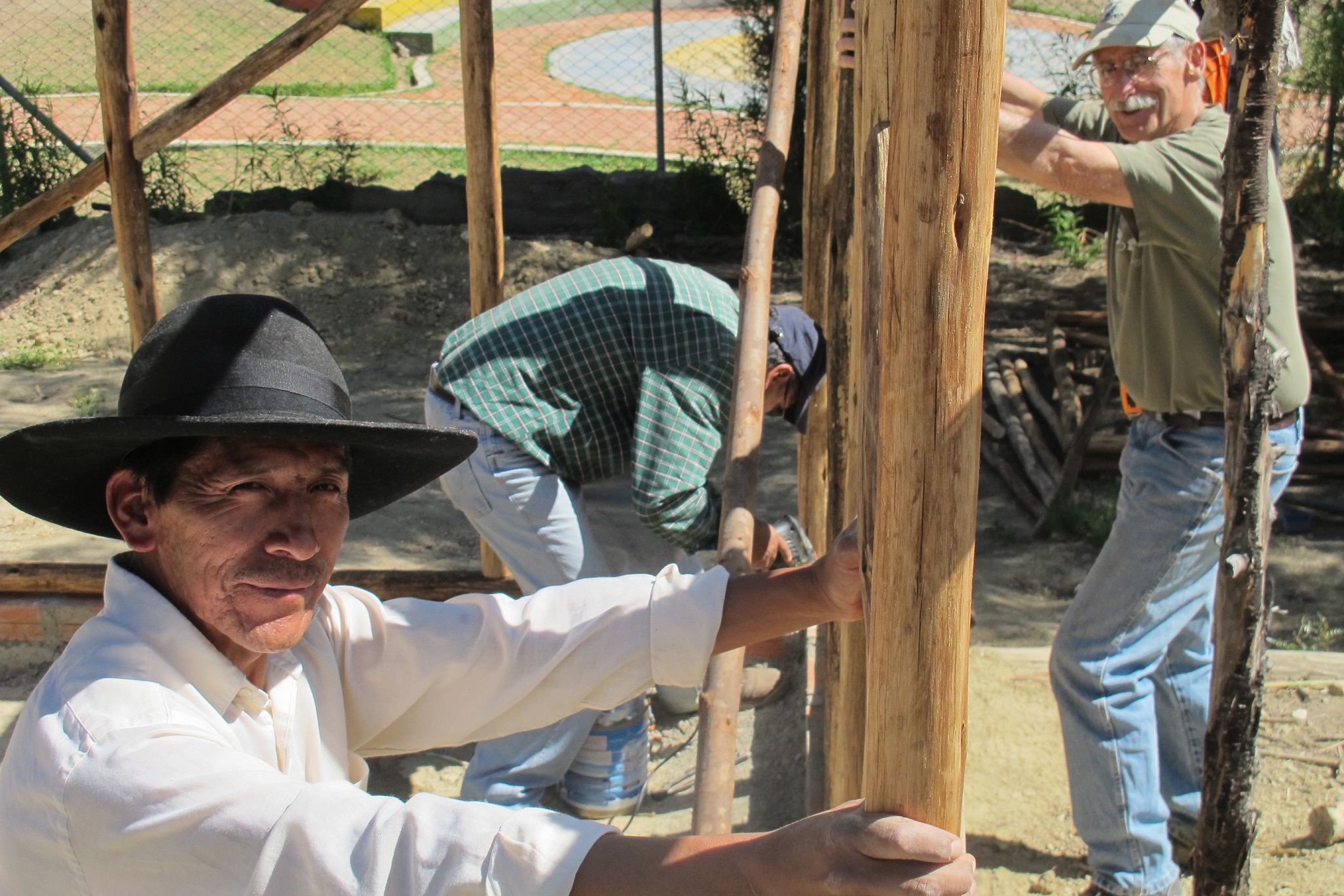 Most days we were given a ride to “work” by Rolando or Emma, and would take a collectivo home.  Collectivos, or mini-vans, are the most common form of public transit in Bolivia and our ride home- about 5 Km. cost the ridiculously low sum of 1.5 Bolivianos, or about 20 cents.  Our days flowed fairly smoothly- volunteer for 6 to 8 hours, some days take Spanish class at the school next door, other days walk up the hill in Mallasa to the Oberland Hotel for a café con leche  and wifi, stop in the little shops to pick up some ingredients and make our way back to our little house.  Every day had a little surprise that brought us some huge laughs, most often involving a mix-up in the language.  Like the time I  told Maxima and Maria, the women I worked with in the kitchen, that when we are in Canada I am a maestra de cochina ( a disgusting/dirty/piggish teacher) instead of a maestra de cocina ( a cooking teacher)!  Or, one day when I didn’t  feel particularly hungry, so told them no tengo mucho hombre (I don’t have much of a man) instead of no tengo mucho ambre (I don’t have much of an appetite.)  Of course, right on que, Doug walked into the kitchen for lunch which brought on another bout of hysteria.

It was very difficult to leave our new family at Up Close Bolivia at the end of November, so to ease the blow, we decided to return on December 11, after a little Bolivian tour, for the annual Christmas party and dinner at the pre-school.  More importantly, we returned so that Doug could play Papa Noel and, what a great Santa he was.  The kids were thrilled, mesmerized even. 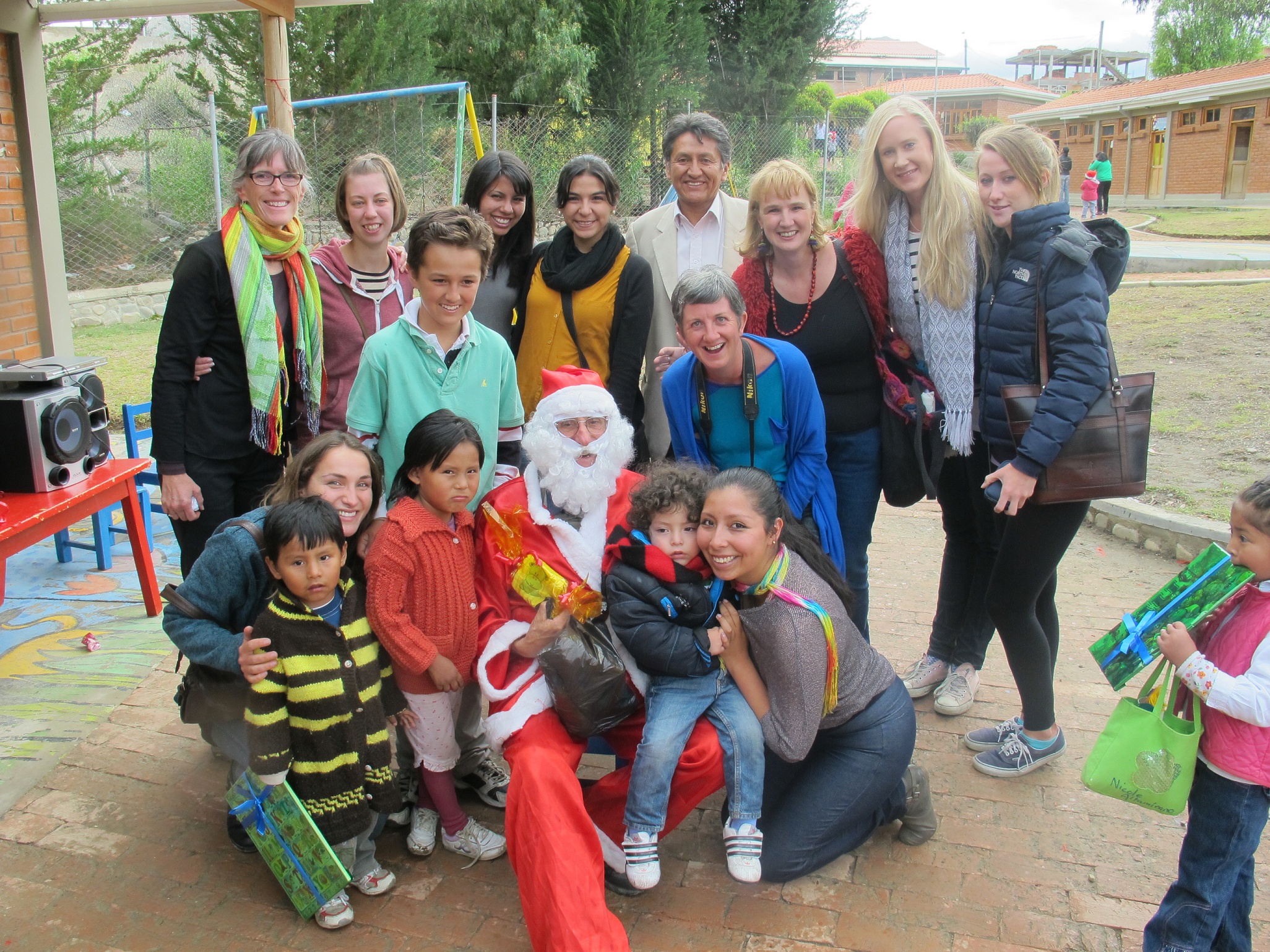 Papa Noel and the Up Close Team

That evening there was a family dinner and the cooks put on a traditional Lechon, roast pork, with roasted potatoes, baked plantain, salsa picante and salad and we all sang Christmas carols.  Papa Noel made another appearance, but this time he was slightly taller and had a distinctly British accent.  Father Christmas, as he is known in the UK, aka, Jeremy, stole the show! 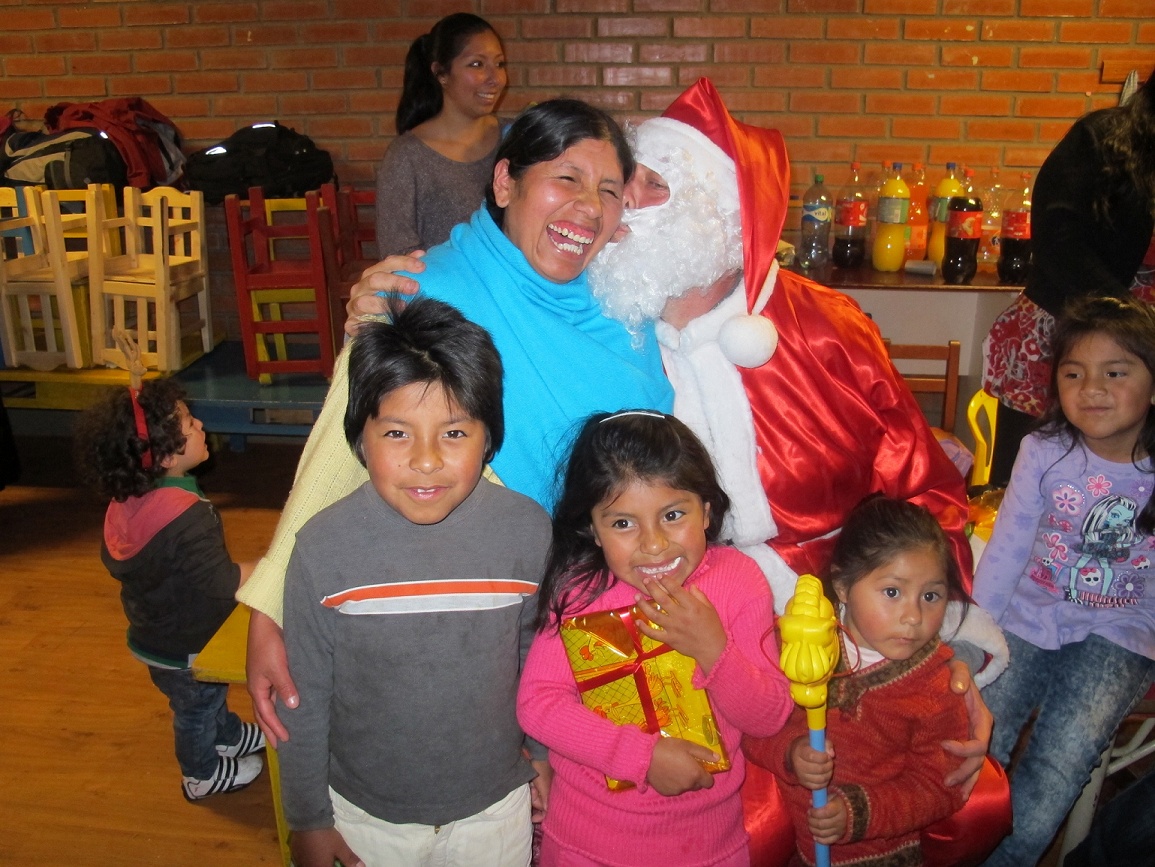 Father Christmas, the second! Is there such a thing as “one-up-Santa-ship?”

We hope to return to Bolivia in the future and work with Emma, Rolando and the rest of the gang at Up Close Bolivia again.   We fell in love with Bolivia and its people.  When we decided to travel to South America as volunteers, we thought that as volunteers, we might help to enrich the lives of others.  Little did we know that it would be our lives that would be enriched beyond measure, and so to Up Close Bolivia, we say a very heartfelt, thanks!